There is nothing better than a good rum Bundt cake, and the classic Bacardi cake is the best of them all. This recipe is much like the original Bacardi cake from my first Cake Mix Doctor book, but made with a gluten-free cake mix, of course. The difference is the glaze, a better glaze with some brown sugar in it. The glaze seeps into the cake, keeping it moist, and full of good rum flavor. The pecans in the bottom of the pan are totally optional, but I love how they get crunchy as the cake bakes. 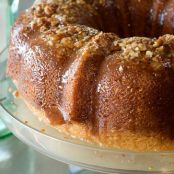 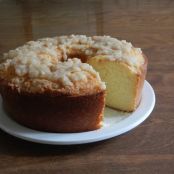 For the cake
Vegetable oil spray, for misting the pan


1. Make the cake: Place a rack in the center of the oven and preheat the oven to 350ºF. Lightly mist a 12-cup Bundt pan with vegetable oil spray. Scatter the pecans evenly in the bottom of the Bundt pan. Set the pan aside.

2. Place the cake mix, pudding mix, sour cream, oil, ¹⁄³ cup of rum, and the water, eggs, and vanilla in a large mixing bowl and beat with an electric mixer on low speed until the ingredients are just incorporated, 30 seconds. Stop the machine and scrape down the side of the bowl with a rubber spatula. Increase the mixer speed to medium and beat the batter until smooth, 1 1/2 to 2 minutes longer, scraping down the side of the bowl again if needed. Pour the batter over the pecans in the prepared Bundt pan, smoothing the top with the rubber spatula, and place the pan in the oven.

3. Bake the cake until it is golden brown and the top springs back when lightly pressed with a finger, 40 to 45 minutes.

4. Meanwhile, make the buttered rum glaze: Place the butter in a small saucepan over low heat and stir until melted. Add the brown sugar and 3 tablespoons of rum, and stir to combine over low heat until the sugar dissolves and the mixture boils and thickens, 3 minutes. Remove from the heat and let the glaze cool.

5. Transfer the Bundt pan to a wire rack and let the cake cool for 10 minutes. Run a long, sharp knife around the edges of the cake, shake the pan gently, and invert the cake onto a wire rack to cool completely, 5 to 10 minutes longer.

6. Using a wooden skewer, poke a dozen holes in the top of the cake, being careful not to loosen the pecans. Very slowly spoon the cooled glaze over the warm cake letting it soak into the holes in the cake before adding more. Let the cake cool to room temperature, 20 minutes longer before slicing and serving.

Note: If you have a nut allergy, omit the pecans and dust the pan with cinnamon sugar (see box, page 118). The cake will be just as delicious.

Keep It Fresh! Store the cake in a cake saver at room temperature for up to three days. Freeze the unglazed cake, wrapped in aluminum foil, for up to one month. Let the cake thaw overnight on the kitchen counter before glazing.

You might also like:
The Cake Mix Doctor Gets Unbelievably Gluten-Free in Her ...
Damp Apple and Almond Cake