The mascarpone gives this risotto its delectable creaminess. If you like, you can make a close substitute with two ounces of cream cheese, at room temperature, and seven ounces of heavy cream. Whir them in a blender just until smooth; don't blend the mixture too long or it may curdle. Also, you can use a large onion in place of the leeks. 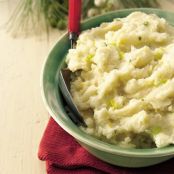 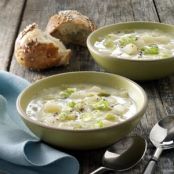 In a medium saucepan, bring the broth and water to a simmer.


In a large pot, heat the oil over moderately low heat. Add the leeks and cook, stirring occasionally, until translucent, about 10 minutes. Add the rice and stir until it begins to turn opaque, about 2 minutes.


Add the wine and salt to the rice and cook, stirring frequently, until all of the wine has been absorbed.


Add about 1/2 cup of the simmering broth to the rice and cook, stirring frequently, until the broth has been completely absorbed. The rice and broth should bubble gently; adjust the heat as needed. Continue cooking the rice, adding the broth 1/2 cup at a time and allowing the rice to absorb the stock before adding the next 1/2 cup. Cook the rice in this way until tender, 25 to 30 minutes in all. The broth that hasn't been absorbed should be thickened by the starch from the rice. You may not need to use all of the liquid, or you may need to add more broth or water. Add the ham, cheese, and pepper.

eggs with leeks and cream