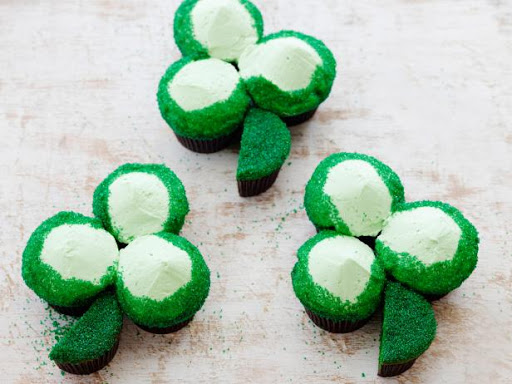 Celebrate St. Patrick's Day with these fun velvet shamrock cup cakes! Shaped like shamrocks and filled with the rich chocolatey flavors of traditional red velvet cake, these cute little desserts are actually green--green velvet cupcakes that are sure to be a show-stopper on your festive dessert table. This recipe serves a crowd so that everyone at your St. Patrick's Day party will get their grub on with one of these delights. 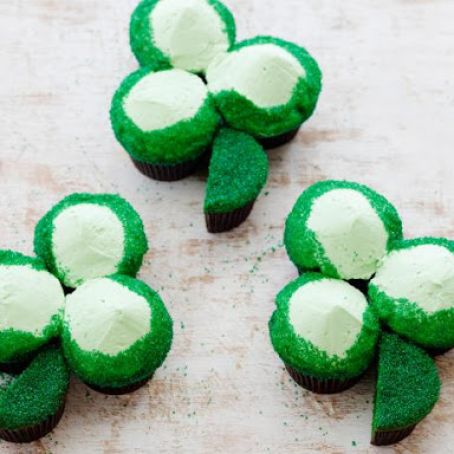 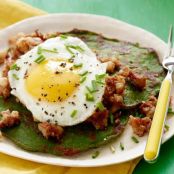 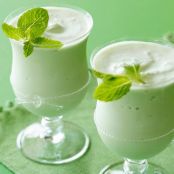 CUPCAKES:
Preheat the oven to 350°F. Line two 12-cup muffin tins with paper liners and spray with cooking spray. Whisk the flour, cocoa powder, baking powder, baking soda and salt in a medium bowl; set aside. Whisk the buttermilk, food coloring and vanilla in a spouted measuring cup; set aside.

Fill the prepared liners about 3/4 full of batter. Bake until the cupcakes bounce back when pressed and a toothpick inserted in the center comes out clean, 20 to 22 minutes. Let cool in the pan for a few minutes, then transfer to a rack to cool completely.

FROSTING:
Put the flour in a small saucepan. Vigorously whisk in about 1/2 cup milk, making sure to get the whisk into the edges of the pan, until you have a smooth, thick paste. (This step keeps the flour from clumping.) Slowly whisk in the remaining milk until fully incorporated and the mixture is smooth. Cook over medium heat, whisking constantly, until the mixture is very thick, about 5 minutes. (Toward the end of the process, the mixture will become a thick paste; it may seem to be forming lumps, but whisk vigorously and the lumps will disappear.) Scrape into a bowl, press plastic wrap onto the surface and refrigerate until cool, about 45 minutes.

Using a stand mixer fitted with the paddle attachment (or a hand mixer), beat the butter and granulated sugar on medium speed until very light and fluffy, about 5 minutes. Add the cooled flour mixture a tablespoon at a time and beat until smooth. Switch to the whisk attachment (or continue with the hand mixer), add the vanilla, salt and 3 to 5 drops green food coloring and whip until very light and fluffy, like thick whipped cream, up to 10 minutes with a stand mixer or 12 minutes with a hand mixer.

To assemble: Using a sharp serrated knife, cut 3 cupcakes in half vertically, gently sawing through the paper liners; set aside. Frost the remaining cupcakes. Put the sanding sugar on a small plate and roll the edge of each cupcake 3/4 of the way around in the sugar, making a green border around each with a gap on one side. On a large serving platter, arrange 18 cupcakes in groups of three, pushing them together at the gaps, to make 6 shamrock cakes. Dip the tops of the cupcake halves in sugar and wedge a pointy end of 1 half between 2 of the cupcakes in each group to form the stems.

Alternatively, you can make the shamrock stems with mini cupcakes instead of halved full-size cupcakes: Fill 8 liners in a mini-cupcake tin 3/4 full of batter and divide the remaining batter among the two full-size cupcake tins. (The larger cupcakes will have a slightly smaller dome.) 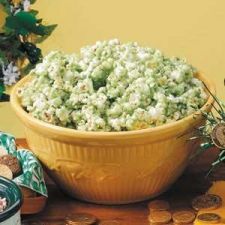