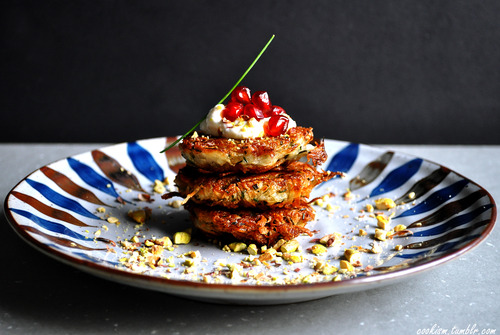 So we were sitting around, in need of some Jewish finger food to munch the lazy afternoon away. And Jerusalem answered our prayers with latkes- traditional potato pancakes eaten by the Jews on Hanukkah. These medallions of shredded potato and parsnips are fried golden like the Arabian sun, and while they are usually eaten with sour cream or yoghurt, Cookism serves it up with the unbeatable flavours of crushed pistachios and pomegranate rubies, a first in the latke world. So if its your first time making latkes, this is the recipe for you. Better latke than never!

(Adapted from Jerusalem A Cookbook) 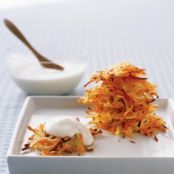 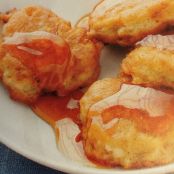 1. Finely chop a bunch of chives. Followed by peeling and grating the parsnips and potatoes.
2. Rinse grated potatoes with cold water and drain well in a colander. Squeeze out as much excess water as possible and lay them out on a clean kitchen towel to dry thoroughly.
3. Separate egg whites from the yolks. Only the whites are used in this recipe.
4. Combine parsnip, potato, chives, egg whites, cornstarch, 1 teaspoon of salt and black pepper to taste in a large mixing bowl. Mix well.
5. Heat half of the amount of butter and oil in a frying pan over medium high heat. Using an ice cream scoop, scoop up portions of the latke mix and squeeze out some liquid by compressing it with a spoon. When the oil is ready, gently pop it out onto the frying pan and roughly flatten the patty with the back of a spoon. Fry the patties for 3 minutes on each side till they are golden brown. Remove and drain them on paper towels. Repeat this step to cook the rest, adding butter and oil when necessary.
6. Serve immediately with crushed pistachio, pomegranate seeds and sour cream. Enjoy! 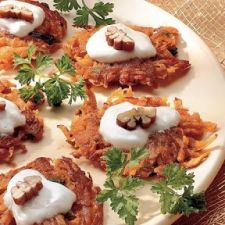