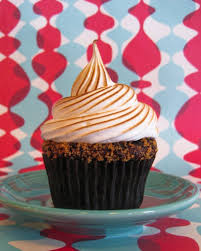 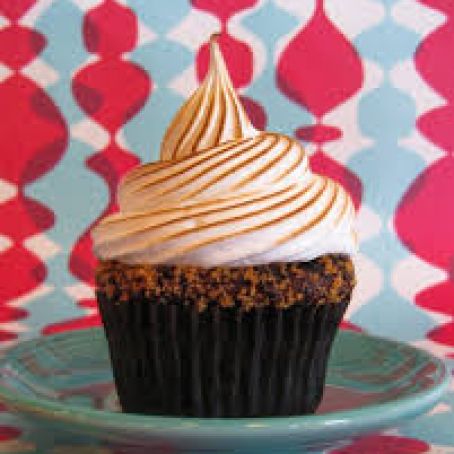 Sift sugar, flour, cocoa powder, baking powder, baking soda, and salt, together into the bowl of a stand mixer fitted with a paddle attachment. Mix on low speed just to combine.

In a small bowl, using a fork, mix together graham cracker crumbs, sugar, and melted butter until well combined.

Sprinkle two teaspoons of chopped chocolate over the graham cracker crusts in each of the baking cups. Bake crusts for about 5 minutes, until edges are slightly golden. Then, remove from the oven and fill each cup about 3/4 full with cupcake batter.

Sprinkle each cupcake with some of the remaining chopped chocolate and graham cracker mixture. Return to the oven and bake for 18-20 minutes, rotating the pans halfway through baking, until a toothpick inserted into the center comes out clean. Let cupcakes cool in tins for 5 minutes, then transfer them to a wire rack to cool completely.

For the marshmallow frosting
In the bowl of a stand mixer fitted with a whisk attachment, add egg whites, sugar, and cream of tartar. Set the bowl over a pan of simmering water and whisk constantly, until sugar is dissolved and mixture is warm to the touch. Attach the bowl to the stand mixer and starting on low speed, gradually increasing to high, beat for 5-7 minutes until mixture holds stiff, glossy peaks. Mix in vanilla.

Spoon frosting into a piping bag fitted with a large decorating tip. Pipe frosting in a swirling motion on each cupcake. Using a torch, lightly toast the frosting, being careful not to burn the cupcake liners. If you don't have a torch, you could use a handheld gas lighter, or you can even broil the cupcakes in the oven for a few minutes (but make sure to watch them closely!).

Serve immediately or store in an airtight container, for up to 2 days.

Note: The recipe for the frosting makes A LOT; you could probably halve the recipe and still have enough to generously pipe all 24 cupcakes. Also, you may get a few extra cupcakes out of the batter.