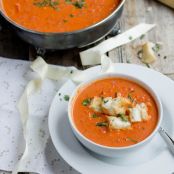 Instructions
Heat the oven to 400 degrees. Slice the tomatoes into 1/4 inch round slices. Arrange the tomato slices on a baking sheet. Drizzle the olive oil over the tomatoes. Sprinkle the basil, and some salt and pepper over the tomatoes. Let the tomatoes roast for 10-15 minutes, until soft.
Drizzle just enough olive oil to barely cover a skillet, and heat over medium low. Add the spinach, and cook until just wilted, stirring frequently.
Lower the heat of the oven to 375 degrees. There is no need to precook the pie crust. If it is frozen let it thaw for 15 minutes first.
Layer the spinach, mozzarella, and roasted tomatoes in the pie crust.
Mix the eggs, cream, milk, salt, and pepper. Either beat them by hand for 2 minutes, or use a mixer for 1 minute. You want the eggs to be light and fluffy.
Pour the egg mixture over the vegetables and cheese and into the pie crust. Fill the crust as much as possible, without letting the egg spill out.
Bake for 35-45 minutes, until the center of the quiche has firmed up.