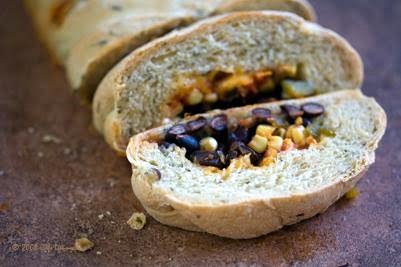 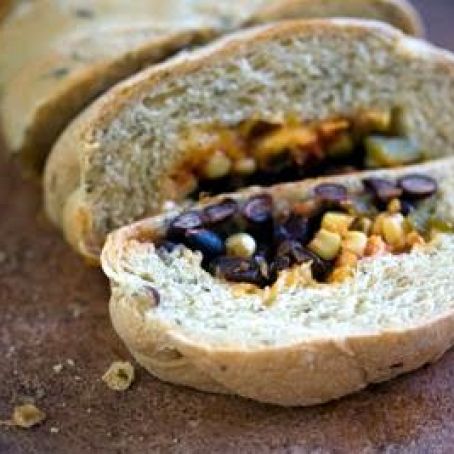 With a Bread Machine:

Place all ingredients except the cilantro in bread machine container. Process on the dough cycle according to the manufacturer's instructions for your machine.If you machine has a mix in setting, when the beeper goes off, add in the cilantro. Otherwise, about two minutes before the end of the machine's second kneading cycle , add in the cilantro. Check the dough about 10 minutes before the end of the second kneading cycle; the dough should be a smooth ball. Adjust flour and water, if necessary. While dough is rising in the machine, prepare the filling. After cycle has completed, transfer dough to a lightly floured surface.

By Hand or Electric Mixer:

In a large bowl, combine yeast, sugar, flour, cornmeal and salt. Make a well in the middle and add water and oil mixture. Stir with a wooden spoon or with the paddle attachment of an electric mixer until ingredients are incorporated. If dough is too dry, add a tablespoon of water at a time until a soft dough is formed. Mix in chopped cilantro. If kneading by hand, transfer dough to a lightly floured surface and knead until smooth and supple, about 5 minutes. If kneading with an electric mixer, change to a kneading attachment and knead for about 5 minutes on medium speed.Place in a lightly oiled bowl and turn to oiled side, cover with plastic wrap and let rise until doubled, about an hour. While dough is rising, prepare filling.

Divide dough into two equal pieces. Working with one piece at a time, roll into a 15x10-inch rectangle. Transfer to a parchment lined baking sheet. Visually divide rectangle into thirds, each 10x5 inches. On the middle third of the dough, leaving 1-inch of space at each end, layer on half the beans, half the black olives, half the corn corn, half the green chiles,half the salsa and sprinkle on half the shredded cheese.

Using a sharp knife or scissors, on the unfilled sides of each section of dough, make 6 evenly spaced 5 inch long cuts in the dough, cutting from one edge of one of the unfilled sides just to where the filling starts. Fold the small section of dough at then end of the filling over the filling. Alternating sides, cross the strips of dough over the filling tucking them underneath the dough on the opposite side, making a braid-like appearance. Repeat process with other rectangle of dough. Tent each braid with a tent of lightly greased plastic wrap and let rise until puffy-about 1 hour.

Bake in a preheated 375°F oven for 30 minutes, or until golden brown and filling has begun to bubble. Let cool 10 minutes before cutting. Makes 2 braids. To freeze cooked braid, let cool completely, transfer to a plastic freezer bag. Defrost while still wrapped so moisture will collect on the outside of the braid, not on the braid. Preheat oven to 350°F. Wrap loosely in foil or place directly on rack, reheat for ten to 15 minutes.