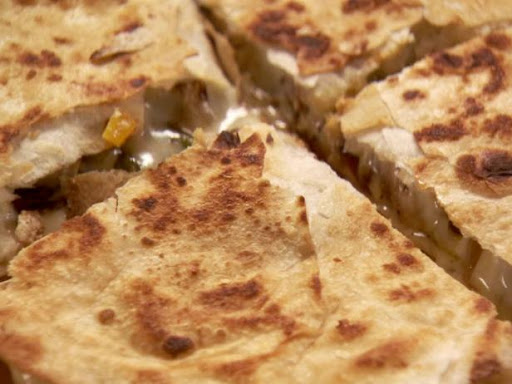 One of Ree Drummond's 16-minute meals! 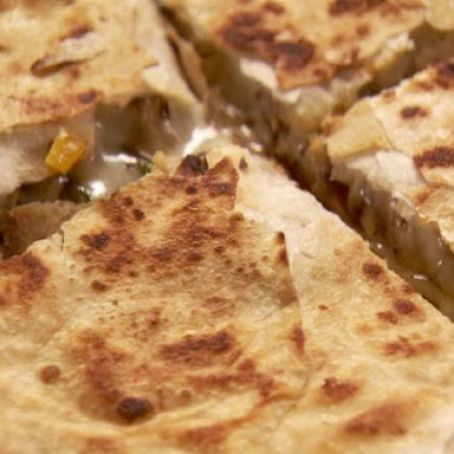 Heat 1 tablespoon of the olive oil in a skillet over high heat. Sprinkle the chicken with salt, pepper and taco seasoning. Add the chicken to the skillet and saute over medium-high heat until done, about 4 minute per side. Remove from the skillet and dice into cubes. Set aside.

Add the remaining 1 tablespoon olive oil to the skillet over high heat. Throw in the onions and peppers and cook until the peppers have a few dark brown/black areas, 3 to 4 minutes. Remove and set aside.

Sizzle 1/2 tablespoon of the butter in a separate skillet or griddle over medium heat and lay a flour tortilla in the skillet. Then build the quesadillas by laying grated cheese on the bottom tortilla, and then arranging the chicken and cooked peppers. Top with a little more grated cheese and top with a second tortilla.

When the tortilla is golden on the first side, carefully flip the quesadilla to the other side, adding another 1/2 tablespoon butter to the skillet at the same time. Continue cooking until the second side is golden. Repeat with the remaining tortillas and fillings.

Cut each quesadilla into wedges and serve with Pico de Gallo.

Now, slice 1 or 2 jalapenos in half. With a spoon, scrape out the seeds. (If you like things spicy, leave in some of the white membranes.) Dice the jalapenos very finely; you want a hint of heat and jalapeno flavor, but you don't want to cause any fires. Now dump the four ingredients into a bowl.

Slice the lime in half and squeeze the juice from half the lime into the bowl. Sprinkle with salt, and stir together until combined. Be sure to taste the pico de gallo and adjust the seasonings, adding salt or more diced jalapeno if needed.