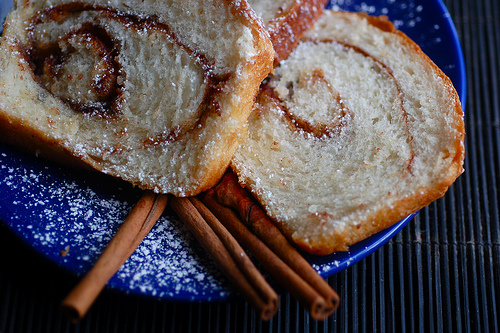 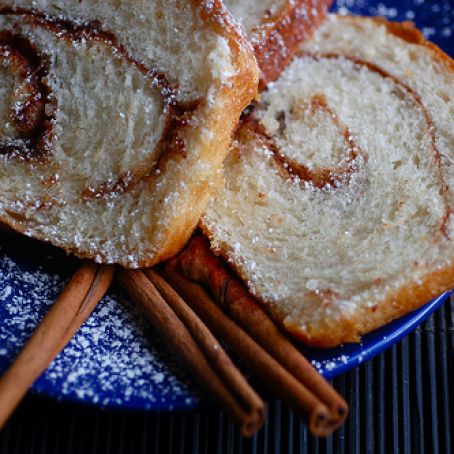 anytime you make bread you have to begin by activating the yeast. a little water and sugar will bring the dried yeast back to life so they can start making CO2 bubbles. i use a bit more sugar here than in regular bread recipes because it’s a sweet bread.

add the warm water, sugar, salt and active yeast together in a medium-sized bowl. let sit for 10-15 minutes or until the mixture begins to foam.

add the oil, then slowly mix in the flour until it is just firm enough to knead. add a little more if it’s still too sticky, or a little less if it’s too firm. turn out onto a floured surfaced and flour your hands.

knead for about 5 minutes, sprinkling more flour if it sticks to your hands. this step helps activate the flour’s gluten, which is the protein in wheat. gluten sticks together in long strands inside the dough, giving it elasticity.
when you are done kneading pull the edges of the ball of dough to one side, so the opposite side is even and smooth. with a few tablespoons of oil grease a large bowl, along with the ball of dough. leave it sitting smooth-side up in the greased bowl, then cover the bowl with a lid, plastic wrap, or a towel. leave in a warm place – like in a sunny window sill or near a warm stove – for its first rise until it doubles in size, which should be about 45-60 minutes.

grease your hands and take the dough out of the bowl. don’t be afraid to deflate it a bit, it will be rising again. flatten the ball of dough into a rectangle shape, as wide as the bread pan you’re using and at least twice as long.

mix together the brown sugar, cinnamon and oil to make the sweet filling.

spread evenly across the rectangle of dough, then roll the whole thing up. if you wanted to make cinnamon buns with this same recipe you could cut strips of the dough, roll them up individually and cook them in a cupcake pan.

grease your pan and lay the rolled dough in it for the second rise, i topped mine off with a sprinkle of cinnamon. once again, leave it in a warm place until it doubles in size, which should take about 30-45 minutes.

bake at 400F for about 20 minutes or until golden brown on top. let cool thoroughly before slicing and serving. this would make a sweet french toast!