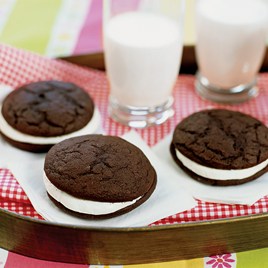 We wanted a light, airy cake for our Whoopie Pie recipe’s base, so we used the creaming mixing method, blending the butter and sugar with a mixer until fluffy and nearly white in color. We also used lots of Dutch-processed cocoa powder and vanilla in our recipe for full flavor and a deep, dark-colored crumb. And for a cleaner, fuller flavor, we replaced the shortening (or lard) found in most whoopie pie recipes with butter. 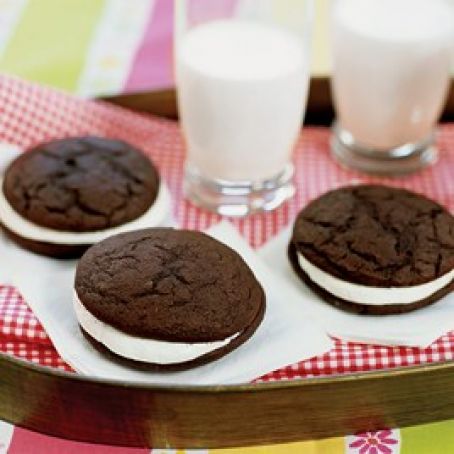 3. Using 1/3-cup measure, scoop 6 mounds of batter onto each baking sheet, spacing mounds about 3 inches apart. Bake until cakes spring back when pressed, 15 to 18 minutes, switching and rotating pans halfway through baking. Cool completely on baking sheets, at least 1 hour.

4. For the filling: With electric mixer on medium speed, beat butter and sugar together until fluffy, about 2 minutes. Beat in vanilla and salt. Beat in Fluff until incorporated, about 2 minutes. Refrigerate filling until slightly firm, about 30 minutes. (Bowl can be wrapped and refrigerated for up to 2 days.)

5. Dollop 1/3 cup filling on center of flat side of 6 cakes. Top with flat side of remaining 6 cakes and gently press until filling spreads to edge of cake. Serve. (Whoopie pies can be refrigerated in airtight container for up to 3 days.)