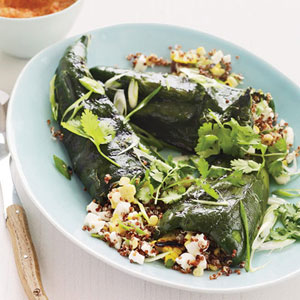 Grill both the stuffed poblanos and the vegetables for the romesco sauce. Any extra sauce is terrific with roasted or grilled potatoes or on a veggie burger. 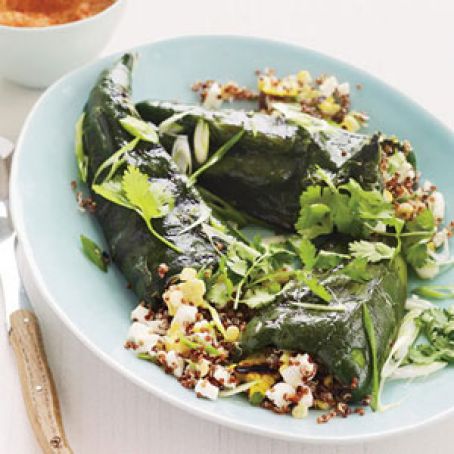 1.In a saucepan, combine the quinoa with 1 cup of water and bring to a boil. Cover and simmer until the quinoa is tender, 18 minutes. Remove from the heat and let stand for 5 minutes; uncover and let cool.

2.Light a grill. Rub the poblanos and corn with oil and grill over high heat, turning occasionally, until the poblanos are charred all over and the corn is charred and tender, 5 minutes. Transfer the poblanos to a bowl, cover with plastic wrap and let stand for 5 minutes. Rub off the skins with a paper towel. Cut off the tops, then pull out and discard the cores.

3.In a large bowl, cut the corn kernels off the cobs. Add the walnuts, scallions, chopped cilantro, mozzarella, and quinoa, and season with salt and pepper. Lightly pack the quinoa into the poblanos. Replace the tops and secure with toothpicks.

4.Rub the poblanos with oil and grill over moderate heat, covered, turning the chiles occasionally, until tender, 15 minutes. Transfer the chiles to plates and remove the toothpicks. Garnish with cilantro sprigs and serve with the Grilled Romesco Sauce.

Romesco Sauce
1.Light a grill. Wrap the red peppers, tomato, and onion in a large sheet of heavy-duty aluminum foil. Grill over moderate heat for about 25 minutes, until the vegetables are softened and charred.

2.Transfer the vegetables to a blender. Add the almonds and crushed red pepper and puree. Season with salt and serve.