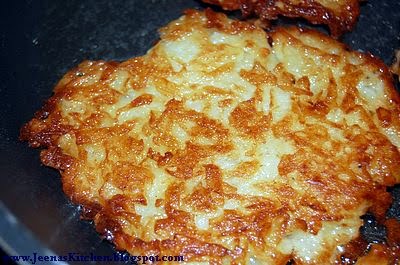 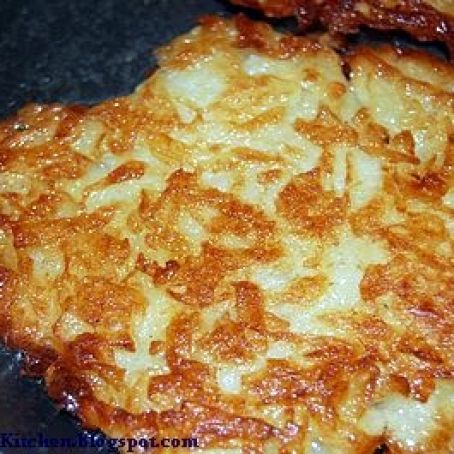 'Potatoes vary in size so the key to getting perfect hash browns is to only add enough egg to the grated potato to give the potato a sticky texture, you do not want the hash browns overly eggy.'


How to make a traditional English hash brown recipe

Place a clean tea towel over a mixing bowl.

Peel the potatoes and grate into the bowl.

Take the tea towel and twist the cloth around the grated potatoes.

Keep squeezing until all of the water has dripped out through the towel.

You should be left with grated potatoes with no moisture.

Add an egg and enough salt and black pepper to season well.

Mix thoroughly to ensure the egg and seasoning is evenly distributed.

You do not want the grated potatoes to be soaked or covered in eggs, you want just a slightly sticky consistency.

It is a good idea to whisk the egg first in a separate bowl and add the egg gradually stirring thoroughly to make sure too much egg is not added.

Take some of the hash brown mixture and shape into a round thin patty.

If you shape the hash browns too thick they will not cook correctly.

Heat some oil to medium/high heat and carefully place the hash browns in the frying pan.

Do not try to move the hash browns or turn them over for at least 4-5 minutes.

Cook for another 5 minutes then keep turning the hash browns over and cooking until they turn crispy and golden brown.

They will take approximately 15 minutes to cook.

Once the hash browns are cooked serve with a full English breakfast or with another accompaniment.

Hash browns are delicious with baked beans and eggs or even eaten on their own.