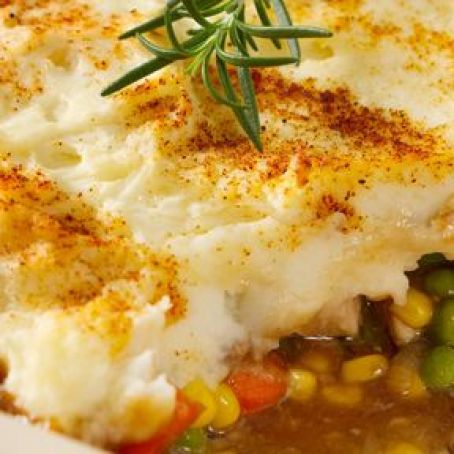 In a cast iron skillet over medium heat, add the Olive Oil and Sausage and cook until it has crisped and rendered its fat. Add the Bacon and cook until crisp.

Add the Carrots, Leeks, cooking until the vegetables have softened. Deglaze the pan with Whiskey.

Add the Flour and cook until the Flour has integrated and a wet sand texture. Add the Peas and Chicken Stock. Bring to a boil and then reduce to a simmer. Cook until the sauce comes together and thickens, about 10 minutes.

For Mashed Potatoes: Place Potatoes in a large pot and cover with Water by 3 inches. Bring to a boil and season with Salt. Cook for 15-20 minutes or until fork tender. Drain and set aside until cool enough to handle.
Press the Potatoes through a ricer. Whisk in about 1 cup of Olive Oil. Transfer to a piping bag.
Pipe the Mashed Potatoes over the top of the filling and transfer to the oven. Broil for 10-15 minutes or until golden brown and crisp.