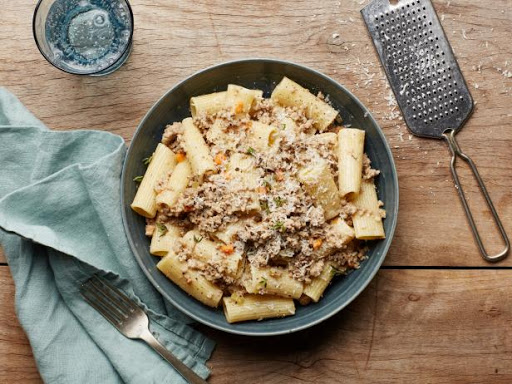 It may sound odd to make a Bolognese sauce without tomatoes, but this white version is deep with flavor from aromatics and herbs, white wine, and a little garam masala, an Indian spice blend that mimics the spices used in Tuscany. Cream adds body and richness. 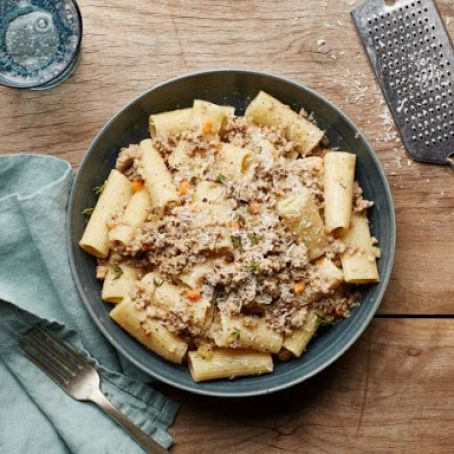 Put the oil, onion, carrot, celery, garlic, pancetta, bay leaves, rosemary and thyme in a large Dutch oven over medium heat. Cook, stirring occasionally and scraping the bottom of the pan with a wooden spoon, until the pancetta is rendered and cooked, and the vegetables are completely tender and golden, 16 to 18 minutes. (If the vegetables are browning too quickly, lower the heat.)

Add the ground beef, ground pork and the garam masala and continue to cook, stirring frequently, until the meat is completely broken up and cooked through, and most of the liquid has evaporated, about 10 minutes. Add 1 teaspoon salt and some freshly ground black pepper.

Add the wine and cook, stirring occasionally, until almost evaporated, 10 to 15 minutes. Add the chicken broth, cream, and the cheese rind if using and bring to a boil. Reduce the heat and simmer, stirring occasionally until the mixture thickens and the flavors come together, about 45 minutes. Discard the bay leaves and cheese rind, and season to taste with salt and pepper. Serve the Bolognese Bianco tossed with the pasta and more grated Parmigiano.

Garam masala is an Indian spice blend that is available in most supermarkets. The spices used can vary by brand; for this recipe, look for a version that contains less cumin (it should be listed far down on the ingredients list).