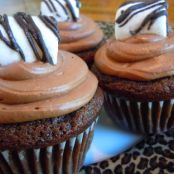 FOR THE CAKE:
Preheat the oven to 350 degrees fahrenheit.
Line 2 muffin pans with 13 paper liners.
In a large bowl, whisk together the flour, sugar, cocoa powder, baking soda, and salt until well combined.
Add the oil and sour cream and whisk until blended.
Add the water in 1/4 cup at a time and whisk until combined.
Whisk in vinegar and vanilla to blend.
Add the egg and whisk until combined.
Scrape down the sides of the bowl with a spatula to make sure all of the ingredients are well combined.
Divide the batter equally among the cupcake liners.
Bake for 18-20 minutes, until a toothpick inserted into the center of the cupcakes comes out almost clean (it's ok if a few crumbs stick to it, but should not look shiny).
Cool completely on wire racks.
FOR THE FROSTING:
Combine the egg whites, sugar, and salt in a bowl (I used the bowl of my stand mixer).
Place the bowl over a pan of simmering water. The bowl should not touch the water, nor should the water be at a rolling boil. It's the steam that's going to heat the egg whites, since we don't want scrambled eggs.
Heat the egg white mixture until it reaches 145-150 degrees fahrenheit, whisking frequently so as not to get scrambled eggs.
Remove the bowl from the heat, and whip the egg whites on medium high using the whisk attachment of your stand mixer.
Whip the egg whites until they become fluffy and double in volume. The bowl should be cool to the touch (this will usually take several minutes).
Turn the mixer down to medium low, and add the butter in one chunk at a time, until it has all been incorporated.
If the mixture looks curdled at this point, this is normal. Just keep whipping for a few more minutes until it comes together. If the mixture looks soupy, you can add a few cubes of chilled butter, or stick the whole bowl in the refrigerator for about 15 minutes and then continue beating.
Once the buttercream has become smooth, and the Nutella and beat until incorporated.
Transfer the buttercream into an 18 inch piping bag and pipe onto the cooled cupcakes.