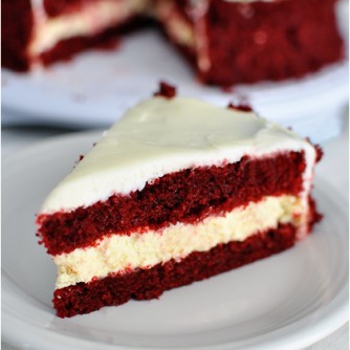 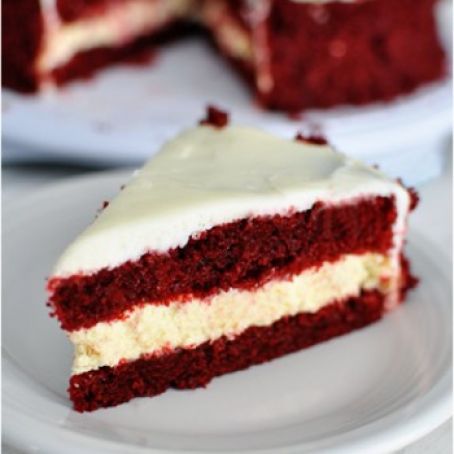 Make the cheesecake layer first so it has time to chill while the cake and frosting are being prepared. Preheat the oven to 325 degrees F. Lightly coat a 9-inch springform pan with nonstick spray. In a large bowl with a handheld electric mixer or in the bowl of an electric stand mixer, whip the cream cheese until it is smooth and creamy. Mix in the sugar and salt and blend for 2 minutes, scraping down the sides of the bowl as needed. Add the eggs, one at a time, blending after each addition. Mix in the sour cream, whipping cream and vanilla and beat until smooth. Don’t overbeat – just mix until smooth and creamy. Pour the batter into the prepared pan. Bake the cheesecake for 40-45 minutes until it is set and not jiggly in the middle. Remove the cheesecake from the oven and let it rest on a wire rack until completely cooled. Wrap the pan in foil and place the cooled cheesecake in the freezer until ready to assemble.

For the red velvet cake, preheat the oven to 350 degrees F. Grease and flour two 9-inch round metal baking pans. In a large bowl, whisk together the flour, sugar, cocoa powder, baking soda and salt. Make a well in the center of the dry ingredients and add the eggs, oil, buttermilk, food coloring, vanilla and vinegar. Whisk until fully combined, and continue whisking for another minute or two until the batter is thick and smooth, scraping down the sides as necessary. Spread the batter evenly into the prepared pans, dividing equally. Bake for 28-30 minutes, until a toothpick inserted in the center comes out with a few moist crumbs attached (don’t overbake or the cake layers will be dry). Let the cakes cool in the pans for 5-10 minutes. Run a knife around the edge of the pans, then invert cakes onto a piece of parchment or wax paper set on a cooling rack. Let them cool completely.

Prepare the frosting, by whipping the cream cheese with an electric handheld mixer in a large bowl or in the bowl of an electric stand mixer until smooth and creamy. Add the butter and vanilla and mix. Gradually add the powdered sugar and mix on high speed until it is light and fluffy and creamy.

Frost the cake by scooping dollops of the frosting on top of the cake and using an offset spatula, spread the frosting over the tops and sides. The sides will be covered up with cake crumbs so they don’t need to be perfectly frosted – just make sure there is an even layer of frosting so the cake crumbs can adhere to the cake. Swirl the frosting across the top. Carefully gather handfuls of cake crumbs and press them into the sides of the cake. You’ll have a mess, but don’t worry, it is easy to gently sweep the fallen cake crumbs out of the way. Keep pressing them to the sides until the entire perimeter of the cake is completely covered.

Cover the cake lightly (or else the cake crumbs on the side will dry out) and refrigerate until ready to serve. The cake can be made up to two days in advance and chilled until serving.