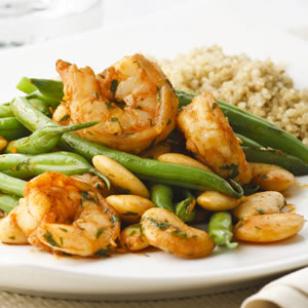 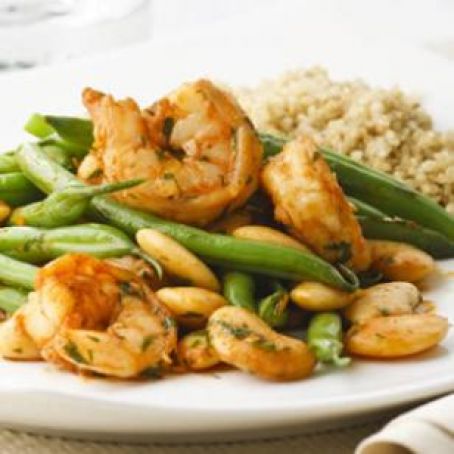 Bring 1 inch of water to a boil in a large saucepan. Put green beans in a steamer basket, place in the pan, cover and steam until tender-crisp, 4 to 6 minutes.
Meanwhile, heat oil in a large skillet over medium-high heat. Add garlic and paprika and cook, stirring constantly, until just fragrant but not browned, about 20 seconds. Add shrimp and cook until pink and opaque, about 2 minutes per side. Stir in beans, vinegar and salt; cook, stirring occasionally, until heated through, about 2 minutes. Stir in 1/4 cup parsley.
Divide the green beans among 6 plates. Top with the shrimp mixture. Sprinkle with pepper and the remaining 1/4 cup parsley.

Note: Shrimp is usually sold by the number needed to make one pound. For example, “21-25 count” means there will be 21 to 25 shrimp in a pound. Size names, such as “large” or “extra large,” are not standardized. In recipes calling for a specific count, order by the count (or number) per pound to be sure you're getting the size you want.
To peel shrimp, grasp the legs and hold onto the tail while you twist off the shell. Save the shells to make a tasty stock: Simmer, in enough water to cover, for 10 minutes, then strain. The “vein” running along a shrimp's back (technically the dorsal surface, opposite the legs) under a thin layer of flesh is really its digestive tract.
To devein shrimp, use a paring knife to make a slit along the length of the shrimp. Under running water, remove the tract with the knife tip. 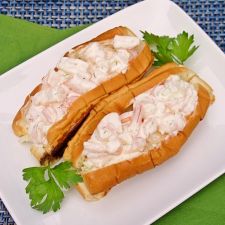