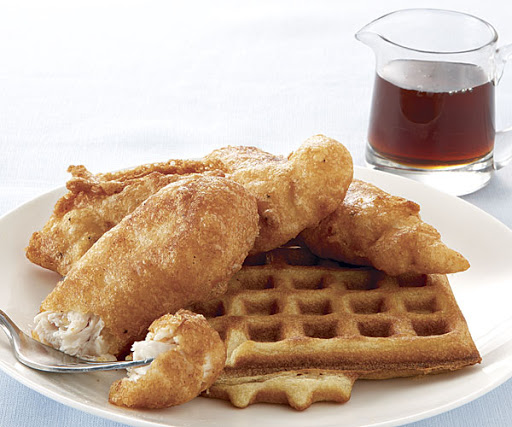 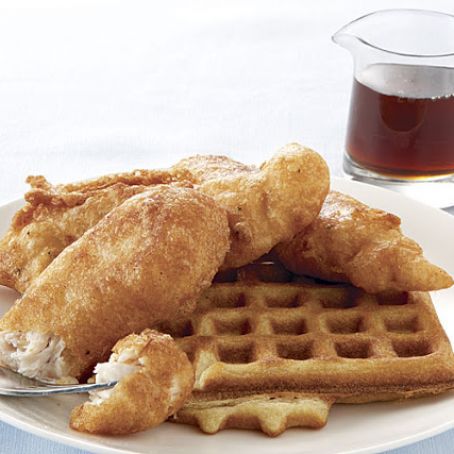 Position a rack in the center of the oven and heat the oven to 425°F. Heat a waffle maker.

In a small bowl, whisk 1/2 cup of the beer with the vegetable oil, buttermilk, and egg. Pour into the dry ingredients and stir until just combined. Set aside.

To make the chicken batter, combine 1 cup of the flour, the remaining 3/4 tsp. baking powder, the garlic powder, cayenne, the pinch of sugar, 1 tsp. salt, and 1/2 tsp. pepper in a shallow baking dish. Stir in the remaining 1 cup beer until just combined. If the batter seems thick, thin with up to 2 Tbs. water. Cover and set aside.

Cook the waffle batter in batches according to the manufacturer’s directions until golden and crisp. Set aside while cooking the chicken.

Season the chicken with salt and dredge in the remaining 1/2 cup of flour. Pour enough oil into a 12-inch nonstick skillet to reach a depth of 1/4 inch, and heat over medium-high heat until shimmering. Coat the chicken in the batter and fry, flipping once with tongs, until the crust is golden and puffed and the chicken is just cooked through, 2 to 3 minutes per side. Quickly blot the chicken on paper towels and sprinkle with salt.

Meanwhile, arrange the waffles directly on the oven rack to re-crisp, about 2 minutes.

Divide the waffles among 4 plates, top with the chicken, and serve with the maple syrup.