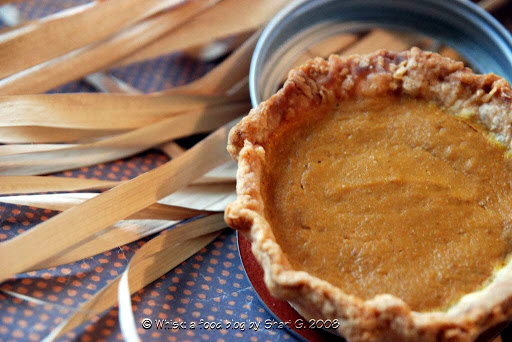 For this pumpkin pie, I wanted to add a couple of my favorite flavors: chai tea and coconut. I used the lids of canning jars as removable bottom tart pans. 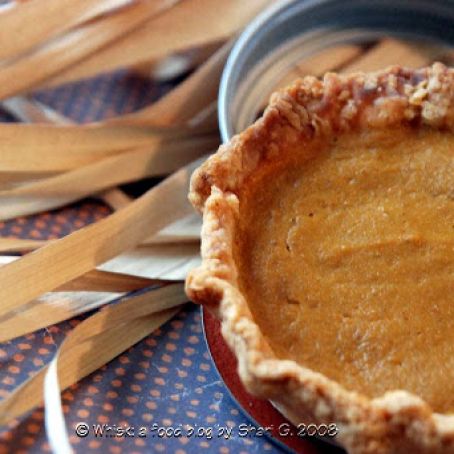 Note: The filling makes more than you need for the crust. Either double the crust or half the filling.

For the crust: Mound the flour, sugar, salt, and ginger on the counter. Make a well and pour the milk and egg yolk in. Start to mix this up with your fingers. Start adding the butter and work it together until it forms a ball. Gather it into a ball and wrap it in plastic wrap. Chill for 4 hours or up to 2 days before rolling and baking.

Note that this dough is tricky to roll out since there's so much butter in it, but it is so tender and crispy that it's worth the extra effort.

Preheat oven to 425˚F. Line crust with foil. Fill with pie weights or dried beans. Bake until sides are set, about 20 minutes. Remove foil and weights. Bake until golden brown. Place aluminum foil collar around edge of crust if it browns too quickly, about 15 minutes. Cool completely.

For the filling: Preheat oven to 325˚F. Heat the heavy cream, coconut milk, cinnamon stick, cloves, ginger, and chai teabag until it comes to a boil. Remove from the heat, and stir in the sugar and salt. Let this mixture steep for 5 minutes. In a separate bowl, whisk the eggs. Strain the cream mixture into a bowl. Slowly whisk in the eggs, tempering them so that the eggs don't curdle. Pour mixture into cooled crust. Bake until filling is set and knife inserted into center comes out clean, about 1 hour for a 9-inch tart and 30 minutes for individual tarts. Cool to room temperature.