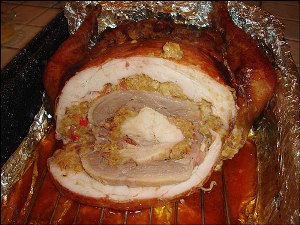 For those not intimately acquainted with this meat masterpiece, the turducken consists of a de-boned chicken stuffed inside a de-boned duck stuffed inside a de-boned turkey. Each layer is padded with stuffing. This new beast is then prepared as a traditional turkey would be: roasted, braised, fried, grilled, barbecued, it's up to you. In its glory days, the turducken was popularized by the great Chef Paul Prudhomme, but no one is exactly sure who invented it. We do know it originated in the specialty meat stores of South-Central Louisiana. There is some evidence that it may have found its American origins in a meal created by the unnamed owner of Corinne Dunbar's, a Creole restaurant in New Orleans.

But the tradition of putting birds into other birds can be traced back to earlier European history. One of the most notable being the rôti sans pareil consisting of 17 different birds starting with a garden warbler and ending with a bustard made in 1807 by Grimod de La Renière for a royal feast. This is still not the oldest evidence of the tradition. Similar creations were made by the Romans. There is also Kiviak, a traditional Christmas dish from Greenland that consists of defeathered seagulls wrapped in a freshly-disemboweled seal carcass, which is then buried and left for months to ferment. Ok, that one may be a bit of a stretch.

While its past can be debated it's safe to say that the future of the bird-within-a-bird-within-a-bird is in America. Some chefs have taken the recipe and made it bigger (the American way) by adding a small pig into the mix - it essentially swallows the turducken and is then cooked. Others have tamed the monster and made it more elegant. The Quaduckant is the upscale version consisting of a quail stuffed in a duck stuffed in a pheasant. The fowl-based Frankenstein monster may be viewed as a symbol of American decadence, but its history suggests so much more, so eat up and know you're participating in a great tradition. 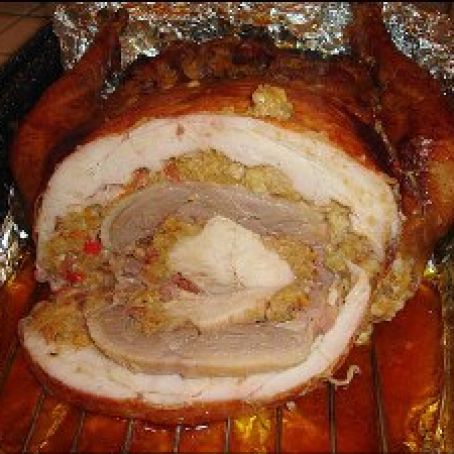 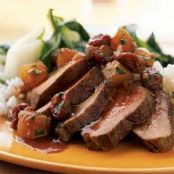 Have the birds deboned by your butcher to save yourself quite a bit of time, but if you're a particularly adventurous cook you can do it yourself. Professional Cutlery Direct provides step by step instructions for deboning poultry. Just be sure to keep the wings and legs on the turkey, that way the finished turducken will still look like a turkey.

It's best to prepare each stuffing ahead of time so that they have time to cool before you are ready to assemble your turducken. A basic stuffing recipe is listed below, and it can easily be adapted for any flavor that you choose.

Begin by placing the turkey skin side down and seasoning it well with salt, pepper and poultry seasoning. Then spread the cornbread stuffing over the turkey. Next, place the duck on top of the cornbread stuffing and spread the Cajun rice dressing over it. You will then place the chicken on top of the Cajun rice dressing and add the shrimp stuffing. Each stuffing layer should be approximately 1/2 inch thick. Any leftover stuffing can be placed in casserole dishes and baked at 350 degrees Fahrenheit for approximately 30 minutes.

Once you've stuffed each bird, fold the sides of the turkey together to close the bird. Enlist someone to help hold the turkey closed as you begin to sew up the opening. The stitches should be spaced about 1 inch apart. You finish sewing the Turducken tie the legs together, just above the tip bones. Be sure to place the Turducken breast side up while cooking. 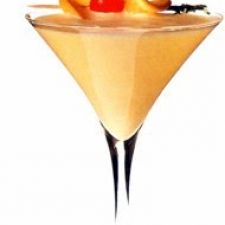