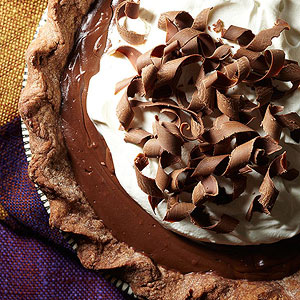 The filling of this chocolate-crust pie is luscious, but not too rich. (Think old-fashioned chocolate pudding.) A bit of sour cream in the whipped topping balances the chocolate perfectly. 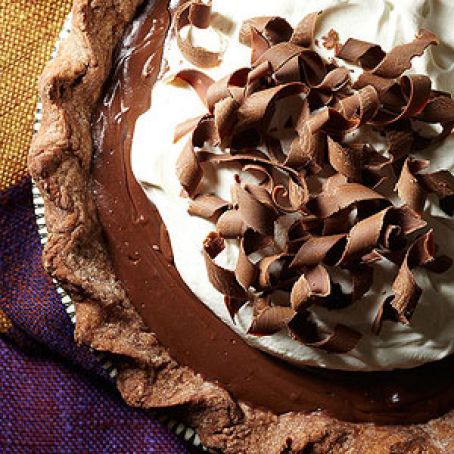 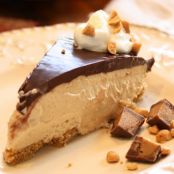 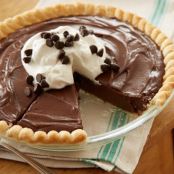 Sprinkle 1 tablespoon water over part of the mixture. Gently toss with a fork. Continue adding water, 1 tablespoon at a time, until all dough is moistened. Form dough into a ball. On a lightly floured surface press dough into a disc. Roll dough into a 12-inch circle. Ease circle into a 9-inch pie plate. Trim pastry to 1/2-inch beyond edge of pie plate. Fold under extra crust and crimp as desired.

Prick bottom and sides of pastry with a fork. Line crust with a double layer of foil. Bake in a 425°F oven for 10 minutes. Remove foil and bake for 8 minutes more or until set and dry. Remove from oven and cool completely.

Place chopped chocolate and butter in a medium bowl. Set aside.

Heat milk in a large heavy saucepan over medium heat until steam rises from surface (do not let boil). Meanwhile, in a medium bowl whisk together 2/3 cup sugar, the yolks, cornstarch, and 2 tablespoons cocoa powder (mixture will be thick).

Pour into cooled crust. Cover pie with plastic wrap and refrigerate for at least 4 hours or overnight until set.

When ready to serve, in a large mixing bowl beat cream, sour cream and powdered sugar with an electric mixer on medium speed just until stiff peaks form. Spread over pie and top with chocolate curls.