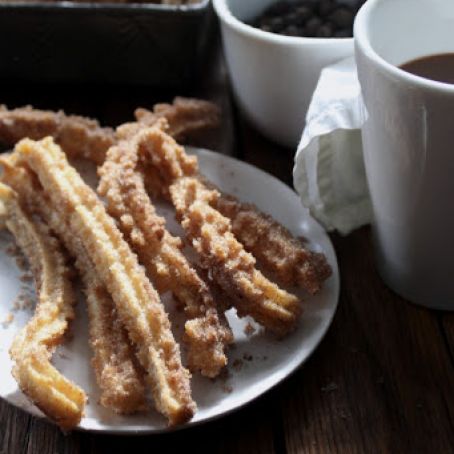 Combine the milks and sugar in a medium saucepan and bring to a simmer over low heat. Add the allspice, cloves, and extract and reduce heat to lowest setting. Continue to heat for about 20 minutes. Strain through a sieve into a clean saucepan. Discard the spices.

Bring the mixture back up to a simmer over medium heat. Add the chocolate and stir until completely melted, about 4-6 minutes. Remove from the heat while you are making the churros and reheat before serving.

To make the churros, bring 4 cups water, butter, salt and rum to a rolling boil. Stirring vigorously, gradually add the flour. Reduce the heat and continue to stir until the dough pulls away from the sides of the pan and forms a ball, about 1 minute. Let cool for 1 to 2 minutes before frying.*

Notes: The dough can be prepared in advance and stored in the refrigerator in an airtight container for up to 2 days. Let the dough rest at room temperature for about 15 minutes before frying.

Combine the sugar and cinnamon in a large shallow bowl and set aside. Heat the oil in a large heavy saucepan to 360°F.

Spoon the dough into a pastry bag fitted with a large star tip or plastic bag with the corner cut off to create a 1/2-inch opening. Squeeze three or four 4-inch strips of dough-snipping them to that length with kitchen shears-into the hot oil and fry until golden brown, about 2 minutes per side. As they are finished, remove the churros with a slotted spoon and drain them well on paper towels. Repeat with remaining dough.

When the churros are cool enough to handle but still warm, roll them in the cinnamon-sugar mixture and set them on a platter. Serve with the hot chocolate.