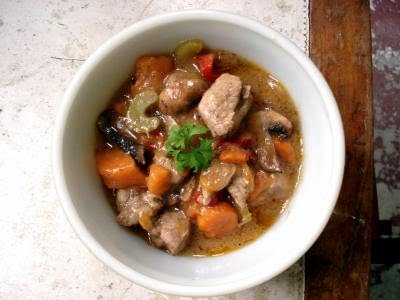 Tastes like Fall :)...the gravy in the stew is gluten-free! 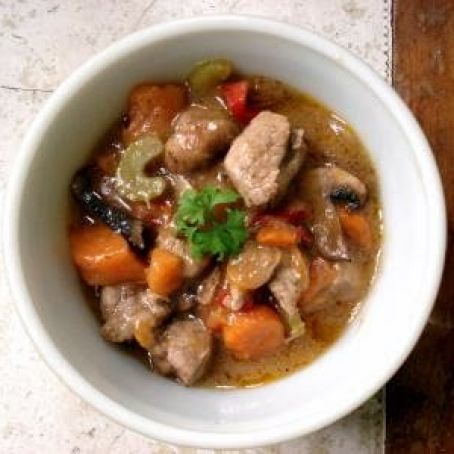 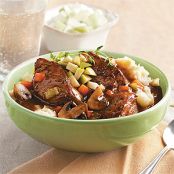 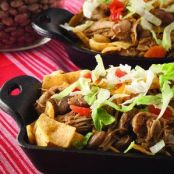 For the marinade:
Cut up pork loin into cubes, set aside.

Sautee onion and bell pepper in 1-2 TBSP olive oil on medium/high until the onion is translucent. Add oregano, parsley, 1/4 tsp of chili powder.

Remove marinated meat from refrigerator. Add it to the pan with the onion and bell pepper WITHOUT the marinade. Leave the marinade in the bowl.

In a separate sauce pan, add the marinade. To the marinade in the pan, add the 3 tbsp of flour, and 3/4 cup chicken broth. Then bring to a low boil while constantly stirring. (Add the flour when it's still cool otherwise it will become lumpy.)

Cook the onion/bell pepper with the pork on high with the sweet potato and carrots until pork is lightly cooked on the outside. Then add the marinade (combined with flour and broth) to the pork.

After the 45 minutes, add mushrooms and celery. Add 1/4 tsp more chili powder. Stir. Add 1/4 cup more pomegranate tea then stir again. Sprinkle with salt and pepper and allow the stew to simmer for about 15 more minutes. 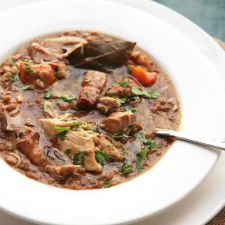