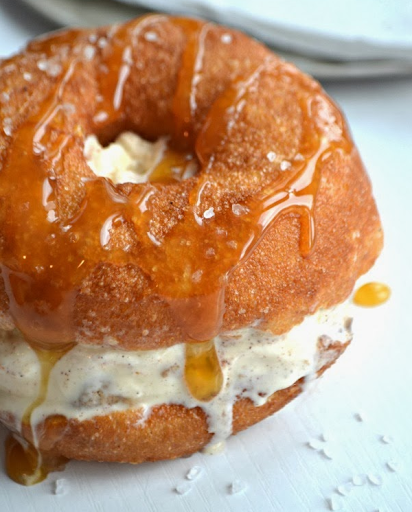 Start by preparing your ice cream. Whisk all of the ingredients together and then follow the directions to your specific ice cream maker.

To firm the ice cream up, place in freezer as needed.

To prepare your doughnuts. Heat oil to 360 degrees.

In a small bowl mix yeast and 2 tbs warm water together until it forms a paste. Set aside until it starts to bubble and foam.

In the bowl of your electric mixer, place buttermilk, maple syrup, melted butter, eggs and salt. Mix until incorporated.
Mix in 1 cup of flour and your yeast.

Once combined, turn mixer to low and slowly add in remaining flour 1/4 cup at a time. When the dough is only slightly sticky but can be handled. Turn mixer to medium speed and allow it to knead the dough for about 5-6 minutes. Or until the dough is elastic.

Place dough in a buttered bowl, cover with plastic wrap or a kitchen towel and allow to rise until it has doubled in size.
Depending on the temperature of your house and the kind of yeast you use, rise times may vary. On average mine take about one hour to double in size.

Punch dough down and press or roll out until it is a 1/2 inch thick.

Using a doughnut cutter, cut your doughnuts out. ( I got 12 doughnuts and 12 doughnut holes)
Allow to rise until they have doubled in size again.

Place doughnuts in fryer 2-3 at a time. Fry for about three minutes per side or until they have evenly browned.
Also be sure to fry the little doughnut holes, their fry time will be a tad shorter.

Remove doughnuts and place them on a paper towel to drain.

Once doughnuts have cooled, slice in half and fill with frozen ice cream.

For the doughnut holes, roll in some cinnamon and sugar if desired.