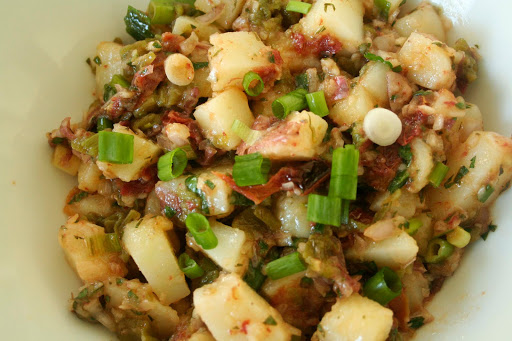 Sometimes, we need to not kid ourselves. Sometimes, recipes call for real sugar, white flour, starchy potatoes and bacon. And sometimes, we must oblige the food gods and their commands to eat the damn stuff. I have substituted sweet potatoes for the white, turkey bacon for the pork and this recipe still kicks the patoot out of every tater salad you've ever had.

My dad used to make this when I was growing up and even though there is that umami of someone you love cooking for you missing from this dish, it's still damn good when you make it yourself. 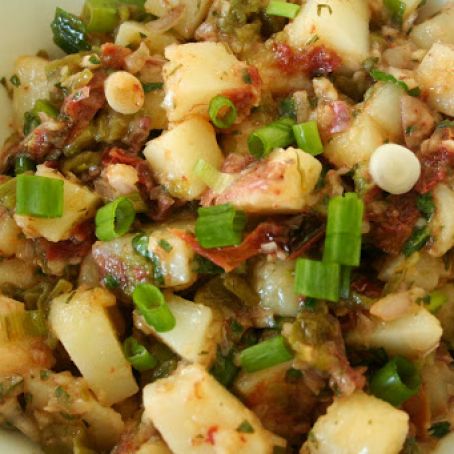 Cook the potatoes in a large pot of water until just tender (about 5 minutes from when the water starts to boil). Drain and cool under cold running water. Slice the potatoes about 1/4 inch thick and place in a large bowl. Add eggs and mix well.

Saute the bacon until browned. Remove the bacon from the pan and set aside, reserving the drippings.

Pour off all but 2 tablespoons of bacon drippings and set skillet over high heat. Add the onions and cooks, scraping the skillet occasionally, until the onions are golden, about 3-5 minutes. Add all of the seasoning mix, and whisk in the flour. Slowly add the chicken stock, vinegar and sugar, whisking constantly. Cook, whisking frequently, until the mixture is thick, about 5-6 minutes. Remove from heat.

Fold the sauce into the potato and egg mixture, add the green onions tops and bacon, and combine thoroughly. 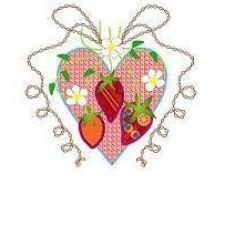