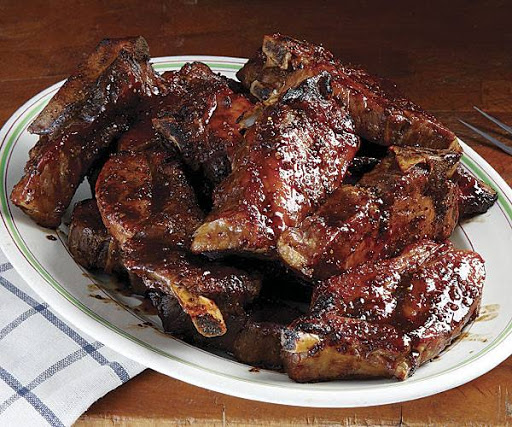 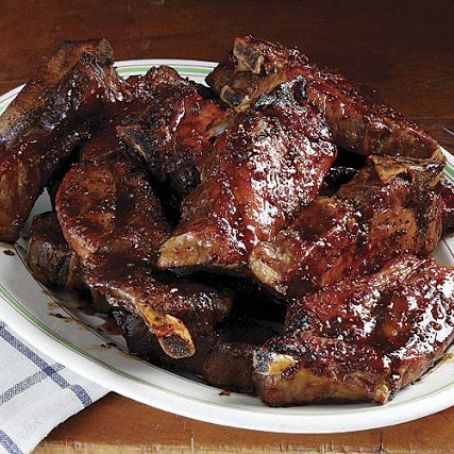 Position an oven rack about 6 inches from the broiler element and heat the broiler on high.

Arrange half of the ribs in a single layer in a broiler pan (without the top rack). Broil, turning occasionally, until browned on all sides, about 15 minutes. Transfer to a platter and discard the fat in the pan.

Put the pan over high heat. Add 1 bottle of the beer and bring to a boil, scraping up the browned bits from the bottom of the pan with a wooden spatula. Transfer the mixture to a large roasting pan. Repeat with the remaining ribs and beer.

Clean the broiler pan. Reposition the rack to the center of the oven and lower the oven temperature to 350°F.

Heat the oil in a 12-inch skillet over medium heat. Add the onion, carrot, celery, and garlic and cook, stirring occasionally, until the onion softens, about 5 minutes. Transfer to the roasting pan holding the beer mixture; stir in the broth, soy sauce, and red pepper flakes. Spread the vegetables in an even layer and arrange the ribs on top (it’s OK if they're crowded).

Cover the roasting pan with heavy-duty aluminum foil, crimping the edges to create a tight seal. Braise in the oven for 30 minutes. Turn the ribs, re-cover the pan, and braise until the ribs are tender when pierced with a small knife, 60 to 80 minutes more.

Line the clean broiler pan with aluminum foil and transfer the ribs to the broiler pan. Tent loosely with more foil while you make the sauce.

Strain the braising liquid through a fine sieve into a medium saucepan; discard the solids. Let stand for 5 minutes; skim off and discard the fat on the surface. Bring to a boil over high heat. Lower the heat to maintain a steady simmer and cook, stirring often, until the liquid has reduced to 1-1/2 cups, about 20 minutes. Whisk in the brown sugar, mustard, and vinegar and raise the heat to return to a boil. Then lower the heat to maintain a simmer and cook, stirring occasionally, until reduced to 1-1/2 cups, 10 to 15 minutes.

Leaving the rack in the center of the oven, heat the broiler on high.

Make Ahead Tips:
You can braise the ribs and make the sauce up to 1-1/2 hours ahead and keep them at cool room temperature. Brush the ribs with sauce and finish them under the broiler just before serving. 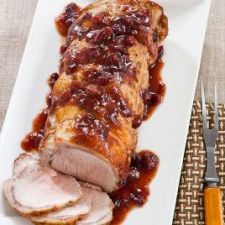 Pork Loin with Cranberries and Orange