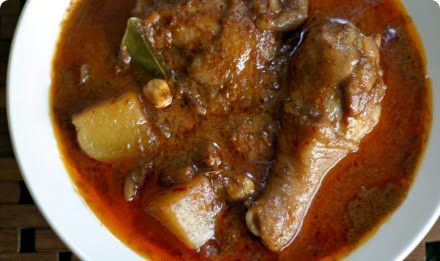 A Southern Thai curry which has a lot of Indian influence. Massaman is an old way of saying “Muslim”, for many of the dry spices were carried to Thailand by early Muslim traders. Like Indian curries, this curry is heavy on dry spices and very aromatic. It’s typically served with rice or roti, and sometimes with a side of ajaat. 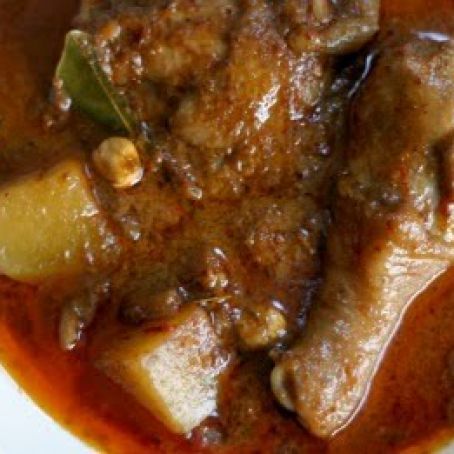 If making your own paste, dry roast the dry spices in a pan on medium heat until fragrant, about 2-4 minutes. It’s best to roast each thing one at a time until fragrant. The chilies should be browned. Roast the shrimp paste wrapped in tin foil for a few minutes too.

Soak the dried chilies until soft, then take out the seeds and inner bits and chop fine.

Pound the paste in a stone mortar & pestle. Start by grinding up the dried spices until powdered, then set aside. Put the chilies in the mortar and pound until uniformly smashed, then add the rest of the ingredients, starting from hardest and driest and working up to softest at the end. Then add the dried spice powder back in and the shrimp paste. Mix well. If using a food processor, just mix it all in together. If using canned paste, skip these three steps.

Cut the potatoes and onions into bite-sized pieces and wash the chicken.

Add the oil to the pan and turn on to medium high. Fry 4 tablespoons of the paste until fragrant, about 3-4 minutes. Keep stirring so it doesn’t burn.

Add the whole chicken pieces. Fry until the chicken is sealed on the outside, about 2-3 minutes.

Add 1 cup of the coconut cream (top part of the can if using canned – don’t shake the can). Simmer until the oil separates, about 2-3 minutes. You’ll see reddish oil starting to float to the top.

Add the potatoes, peanuts and onions and the 1 cup of coconut milk. Simmer for a few minutes.

Simmer (and stir well) until the mixture browns and a good deal of oil comes to the top. About 15-20 minutes. If it gets too dry, add some water. Add the fish sauce, palm sugar and tamarind juice at the end. Taste – you may need to adjust the flavor if it’s not salty or sour enough.

Serve with rice or roti. Also is great with ajaat (slightly pickled cucumber salad) on the side.