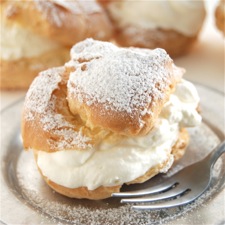 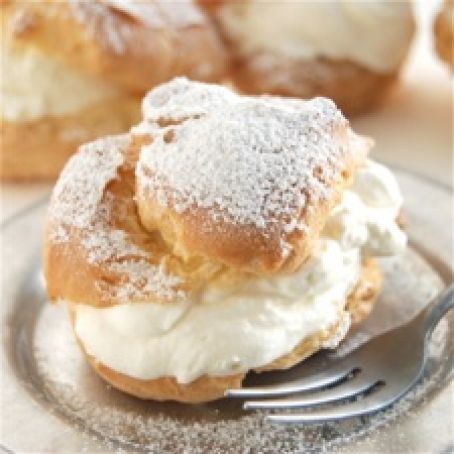 1. Before you begin: note that the pastry recipe will make 12 cream puffs OR 20 to 24 éclairs. The filling recipes (whipped cream, and pastry cream) make enough for 12 pastries each. The icing recipe is a generous amount for icing 2 dozen éclairs. If you simply want to drizzle the éclairs with icing, cut both the chocolate and cream in half.
2. Preheat the oven to 425°F. Lightly grease (or line with parchment) two baking sheets.
3. Combine the water, butter, and salt in a medium-sized saucepan, heat until the butter has melted, and bring to a rolling boil.
4. Remove the pan from the heat, and add the flour all at once, stirring vigorously.
5. Return the pan to the burner and cook over medium heat, stirring all the while, until the mixture smooths out and follows the spoon around the pan; this should take less than a minute.
6. Remove the pan from the heat, and let the mixture cool for 5 to 10 minutes. It'll still feel hot, but you should be able to hold a finger in it for a few seconds. If you have an instant-read thermometer, the temperature should be below 125°F.
7. Transfer the mixture to a mixer, and beat in the eggs one at a time; it'll look curdled at first, but when you add the last egg it should become smooth. Beat for at least 2 minutes after adding the last egg.
8. Using a generously filled tablespoon cookie scoop, or a level muffin scoop, drop the thick batter onto the prepared baking sheets in 3- to 4-tablespoon mounds. Space the mounds about 3" apart, to allow for expansion. For éclairs, pipe the batter into 5" logs about 1/2" to 3/4" in diameter.
9. Bake the pastries for 15 minutes, then reduce the oven temperature to 350°F and bake for an additional 25 minutes, until pastries are a medium golden brown. Don't open the oven door while the pastries are baking.
10. Remove the pastries from the oven. Make a small slit in the top of each, and return them to the oven for 5 minutes, to allow the steam to escape. Place them on a rack to cool. When they're cool enough to handle, split each in half to make top and bottom pieces; splitting and exposing the centers to air will help keep them from becoming soggy.
11. To make the cream puff filling: Pour the cream into a mixing bowl, and begin to whip it on high speed (using your mixer's whisk attachment, if you have one). Sprinkle in the sugar gradually as the cream whips. Whip until stiff, but be careful not to over-whip; cream should still look smooth.
12. Fill the bottom halves of the puffs with whipped cream, then replace their tops. Dust with confectioners' sugar, and serve.
13. To make the éclair filling:
1) In a medium-sized saucepan, stir together 2 1/2 cups of the milk, the sugar, salt, and the vanilla bean. (If you're using vanilla extract or Vanilla Crush, add it at the end.) Bring to a simmer over medium heat, stirring to dissolve the sugar.
2) Meanwhile, whisk the cornstarch, flour, and egg yolks with the remaining 1/2 cup milk.
3)Whisk some of the hot milk mixture with the egg yolks to temper them. This keeps the yolks from turning to scrambled eggs when you add them to the simmering milk.
4) Pour the egg/milk mixture back into the remaining simmering milk. Doing this through a strainer will help prevent lumps later. Bring to a boil, stirring constantly with a whisk, until the mixture thickens.
5) Remove from the heat and strain through a fine strainer into a bowl set in an ice bath. Stir in the butter and vanilla extract (if you're using it). If you're going to flavor the pastry cream with chocolate or some other flavor, this is the time to do it (see variations below).
6) Rub a piece of butter over the surface of the cream, top with a piece of plastic wrap (make sure it touches the top of the pastry cream so it doesn't develop a skin), then refrigerate until cool.
7) Use chilled pastry cream as is for a sliceable cream pie, or a stiff filling for éclairs. Fold in the optional whipped cream, just before using, for a softer filling.
8) Pastry cream will keep, covered in the refrigerator, for up to 5 days. After that it may start to weep.
14. Spoon the filling into the éclair shells.
15. To make the icing, place the chocolate chips or chunks and cream in a microwave-safe bowl or measuring cup.
16. Heat over low heat (or in the microwave) until the cream is very hot.
17. Remove from the heat, and stir until the chocolate melts and the icing is smooth. Spoon over the éclairs, spreading to the edges. Serve immediately.