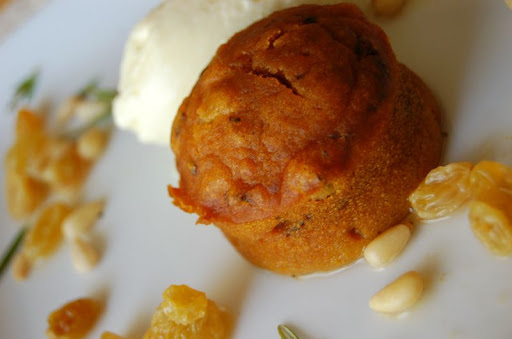 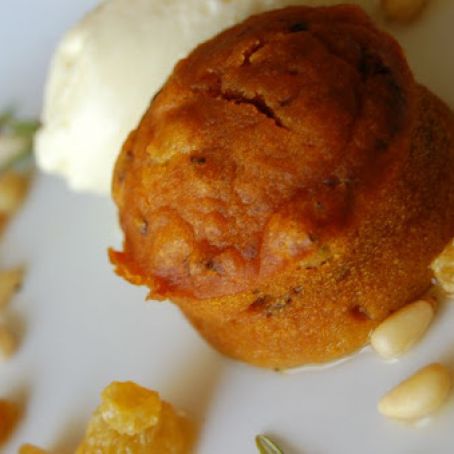 2. Spread the nuts on a baking sheet and toast in the oven until light golden brown, about 10 minutes. Allow to cool. Place the raisins in a bowl and pour the boiling water and liquor over them. Set the raisins aside to plump.

3. In a medium bowl, stir together the flour, salt and baking soda. In the bowl of an electric mixer, beat the eggs and brown sugar until very light. Add the rosemary leaves and, with the mixer running, slowly beat in the olive oil. Beat in the dry ingredients, scraping down the sides of the bowl. Add the pumpkin and beat until smooth. Stir in the drained raisins and pine nuts.

4. Pour the batter into the prepared pan or pans and bake until golden brown, 35 to 40 minutes for the single pan or 25 to 30 minutes for the individual pans. Allow the cakes to cool slightly, then run a knife around the outside of each cake and gently remove the molds.

5. When ready to serve, cut the cake into wedges if baked in a single pan; otherwise, place an individual cake on each dessert plate and serve with a scoop of gelato alongside.

GELATO:
1. Combine the egg yolks and sugar in the bowl of an electric mixer. Use the whip attachment to beat them for 5 minutes on medium speed, or until the mixture is thick and very pale in color and forms a ribbon when the whip is lifted. Continue beating and drizzle in the olive oil; beat for 2 more minutes. Add the milk and cream and continue to beat until all ingredients are combined.

2. Freeze the mixture in a gelato machine according to the manufacturer's instructions. 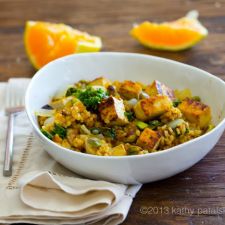