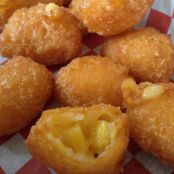 Shred the zucchini on the large holes of a box grater or with the shredding disc of a food processor. Place the shredded on a triple layer of paper towels on a sheet pan or in a colander in the sink. Heavily salt the zucchini and let it rest for 15 minutes. The salt is not measured, just use a lot. The Sale will pull out all of the moisture from the zucchini so the fritters will not be soggy. It will not make them salty.

Cut the kernels from the cob. Dice the onion small, chop the scallions, cilantro and measure the flour. Crack the eggs into a large bowl and scramble lightly. Add the all of the ingredients to the eggs and mix well.

Pick up the shredded zucchini in small handfuls and squeeze out and discard as much liquid as possible. Add the zucchini to the bowl and combine with the other ingredients and season with salt and pepper.

Pour the oil into a large frying pan of about a 1/4-1/2 inch depth. Heat the oil over medium-high heat until hot but not smoking. Test with a small portion of the fritter mixture and if it bubbles, it is ready to begin.

Drop large, heaping spoonfuls of the zucchini mixture into the pan to form disc-shaped fritters. Cook in batches without crowding (about 5-6 minutes at a time, depending the size of your pan) until golden brown on the underside (about 2 minutes) and then flip and cook until golden brown on the second side. Remove to paper towels to drain. Serve with a dollop of sour cream or Greek yogurt. The fritters should be crisp on the outside and slightly custardy on the inside, season with additional salt if necessary immediately when they come out of the oil.