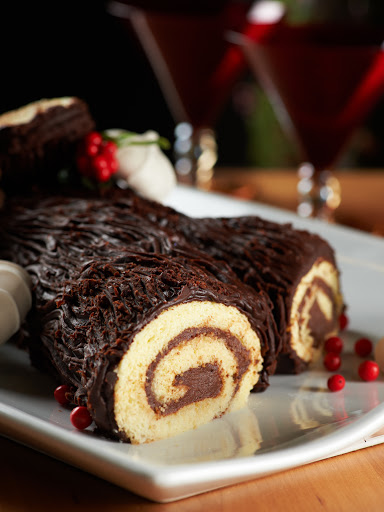 "Merry Christmas from France! This beautiful Yule Log will make your dessert table seem so much more festive than a typical chocolate cake.”—David

Tip: Be sure to read this recipe a few times before beginning. Though not difficult, there are many steps and knowing them ahead of time will help you tackle this Yule Log with ease! 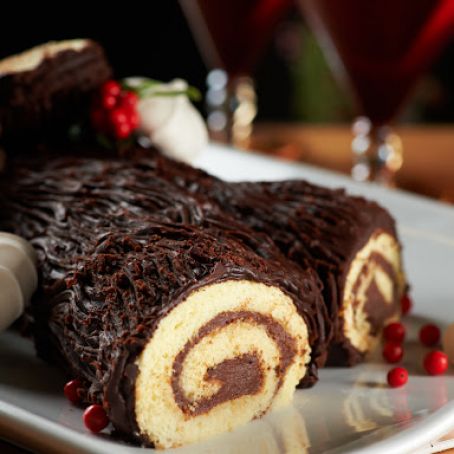 To prepare the pastry cream, whisk together 1/3 cup of the sugar, the cornstarch, and the cocoa powder in a small bowl until evenly mixed. Add the eggs and whisk until fully incorporated. Set aside.
Bring the milk and 2 Tbsp sugar to a simmer in a small pot. Slowly pour the milk into the cocoa mixture, whisking constantly, until fully combined. Add the mixture back to the pot, and cook on medium-low heat, until thickened, stirring constantly with a wooden spoon. Stir in the vanilla.

Pour the mixture into a small glass bowl and cover with plastic wrap, pressing the plastic onto the cream so that it doesn’t form a skin. Refrigerate until needed.

To prepare the sponge roll, place a rack in the middle of the oven and preheat to 400°F. Lightly spray an 11” x 17” jelly roll pan. Line the pan with parchment paper, and then lightly spray again.
Whip together the egg yolks, 1/4 cup + 2 Tbsp sugar, and the vanilla in the bowl of a stand mixer (fitted with the whisk attachment) until pale yellow and creamy. Carefully fold in the sifted cake flour, then pour the entire mixture into a separate bowl and set aside.

After cleaning the bowl of the stand mixer, whip the egg whites with the whisk attachment until frothy. Keep the mixer running and add the salt followed by sugar. Whip until firm peaks form. Fold the egg white mixture into the cake batter, in 3 batches, until fully incorporated. Be careful not to over mix.

Pour the batter onto the prepared jelly roll pan, spreading evenly. Bake for 5–7 minutes, until it’s light golden brown and springy to the touch. Let the cake cool completely.
To prepare the ganache, place the chocolate chips in a medium-size bowl and set aside. Bring the cream and the corn syrup to a boil in a small saucepan. Pour the hot cream mixture over the chocolate chips. Let the mixture stand for a couple of minutes, and then lightly whisk until the chocolate chips are melted and the mixture is fully incorporated. Refrigerate the ganache for 45 minutes, or until set but still spreadable.

To assemble the log, place the sponge roll upside-down on a sheet of parchment paper. Carefully remove the paper on which the cake was baked. Evenly spread the chocolate pastry cream all over the cake. Carefully roll the cake, starting with the widest end, to create a long log. Tightly wrap the cake in the parchment paper and twist the ends to secure. Freeze the cake for 90 minutes.

Slice a 1” piece of cake from each end of the log. Spread a thin layer of chocolate ganache all over the cake—except for the ends of the log—and freeze for another 45 minutes.

Evenly spread the remaining ganache on the cake and use a fork to create a bark-like texture. Decorate with your choice of garnishes. Keep the cake refrigerated until ready to serve.