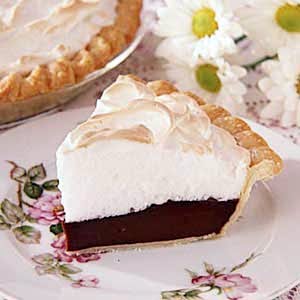 My grandmother served chocolate meringue pie after Sunday dinner each week, usually with an apology it was "too runny" or something else was wrong with it. Of course, it was never less than perfect! I've been married for 22 years, and my husband and I have two daughters (18 and 15). When I was expecting for the second time, I had a craving for chocolate and baked this pie often. One morning, as Cecil was leaving the house, there was half a pie on the counter...which I quickly finished! I was so embarrassed I made another one and left just half—I wanted Cecil to think I'd had the willpower not to touch even a piece of pie. It was years before I could tell him what I'd done. How we've laughed about it since! 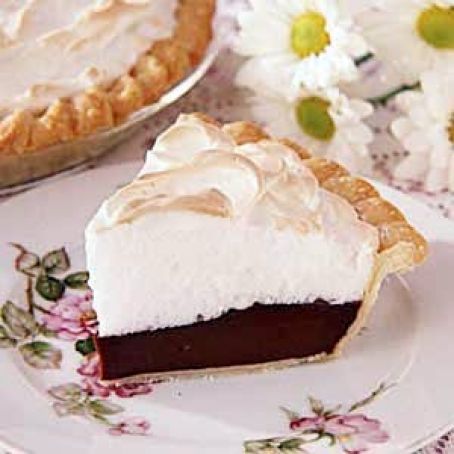 In a saucepan, mix sugar, cocoa, cornstarch and salt; gradually add milk. Cook and stir over medium-high heat until thickened and bubbly. Reduce heat; cook and stir 2 minutes more. Remove from heat. Stir about 1 cup of the hot filling into the egg yolks. Return to saucepan and bring to a gentle boil. Cook and stir 2 minutes. Remove from the heat and stir in vanilla. Pour hot filling into pie crust. For meringue, immediately beat egg whites with cream of tartar until soft peaks form. Gradually add sugar and continue to beat until stiff and glossy. Spread evenly over hot filling, sealing meringue to pie crust. Bake at 350° for 12-15 minutes or until golden. Yield: 8 servings.