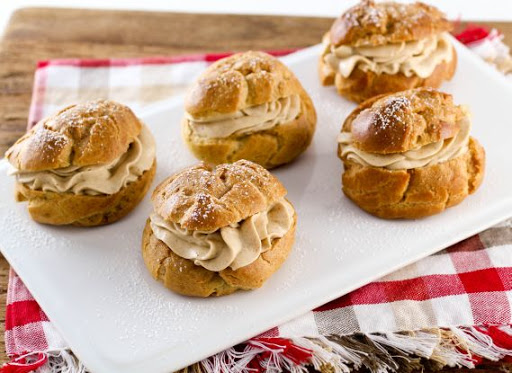 These pumpkin spice cream puffs are such an amazing dessert for fall. They take a little time to make, but in the end they're worth every minute. 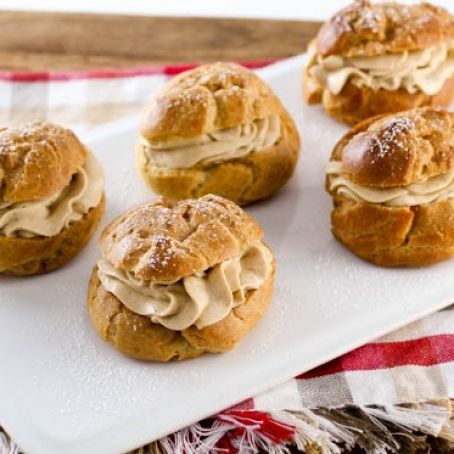 Pour the mixture into a saucepan and place over medium heat. Cook, whisking constantly, until the mixture comes to a boil and thickens, about 8 minutes. Allow the mixture to boil for 30 seconds then turn off the heat and add the butter and vanilla. Whisk until the butter is melted. Pour the mixture through a strainer into a bowl, place a layer of plastic wrap directly over the custard, and chill for 2 hours.

Once chilled combine the gelatin with the cool water and let it sit at room temperature for 10 minutes to bloom. Once bloomed heat for 8 to 10 seconds in the microwave to melt. Cool for 3 minutes.

In the work bowl of a stand mixer fitted with the whip attachment, or in a medium bowl with a hand mixer, combine the heavy cream and powdered sugar. Whip on medium high speed until the cream is fluffy, about 1 minute. Add the melted gelatin and increase the speed to high and whip until the mixture forms firm peaks, about 30 to 40 seconds more.

Stir the chilled pumpkin custard to loosen it, then add it directly to the cream and whip on high for 20 to 30 seconds to incorporate thoroughly. Cover with plastic and chill for 1 hour.

PASTRY:
Heat the oven to 425°F and position the rack into the center of the oven. Line two baking sheets with parchment paper.

In a medium saucepan combine the water, butter, sugar, pumpkin, vanilla, salt, and cinnamon. Place the pan over medium heat and stir occasionally until the mixture comes to a boil. Reduce the heat to medium low and add the flour all at once. Stirring vigorously, combine the flour and the liquid until it forms a ball. Cook for 2 to 3 minutes, or until the dough leaves a film on the bottom of the pan and is smooth.

Transfer the dough to the work bowl of a stand mixer fitted with the paddle attachment, or a medium bowl with a hand mixer. Cool the dough until it reaches 125°F, about 5 minutes. Once cooled begin beating the mixture on low speed and add the eggs, one at a time, making sure the first egg is fully incorporated before adding the next

Put the mixture to a piping bag fitted with a large round piping tip. Pipe the paste into 2 inch balls onto the prepared baking sheet about 2 inches apart. If you find the tops of the puffs are very pointy just dampen your finger with water and tamp them down gently. Bake for 5 minutes, then lower the heat to 350°F and bake for 20 to 25 minutes more, or until the puffs are deeply golden brown all over and sound hollow when gently tapped on the bottom. Remove the pan from the oven and allow to cool to room temperature.

Once chilled fill the cooled puffs with the pumpkin filling. You can either use a small star tip to pipe the filling into the bottoms of the puffs, or you can slice the tops of the puffs, pipe in the filling, and then put the tops back on.

Dust with powdered sugar if desired.