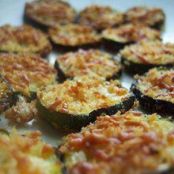 Preheat oven to 375 degrees Fahrenheit.
With a sharp, heavy chef’s knife, carefully cut off just the very ends of the spaghetti squashes (so that they’ll sit upright when filled). Cut spaghetti squash in half width wise, and scoop out seeds with a spoon. Discard seeds. Brush a little olive oil on the inside of each half and sprinkle with salt and pepper.
Place cut-side down on a baking sheet and bake for about 40 minutes, until tender enough to pierce easily with a fork.
Meanwhile, make the filling. In a medium bowl, stir together the ricotta cheese, 1 cup of the shredded mozzarella, garlic, basil, oregano, salt, and pepper.
Remove spaghetti squashes from the oven and, once cool enough to handle, use a fork to scrape the spaghetti-like strands of squash into a bowl. Return shells to baking sheet, this time upright.
Gently toss squash with a little drizzle of olive oil, a pinch of kosher salt, and a few turns of freshly ground black pepper.
Divide ricotta mixture between each squash – about ½ cup of cheese filling per squash. Pile each squash “cup” with the spaghetti squash, dividing evenly. Top each with the remaining shredded mozzarella cheese, about ¼ cup per squash half.
In a small bowl, stir together the bread crumbs and Parmesan. Sprinkle over the top of each. Drizzle with olive oil.
Bake at 375 degrees Fahrenheit for about 30 minutes, until crumbs are golden brown and cheese is bubbly.
Top with basil leaves for garnish if desired and serve.

Notes
Make-ahead tips: these can be prepared and refrigerated up to the point of assembly (store empty squash cups, ricotta, and spaghetti squash strands in fridge). Then assemble and bake as directed. You can also assemble the cups and refrigerate them for up to 24 hours before baking – remove from refrigerator about 30 minutes before baking to allow them to return to room temperature for more even baking. I’ve also reheated baked cups both in the oven and in the microwave and they’re still terrific.