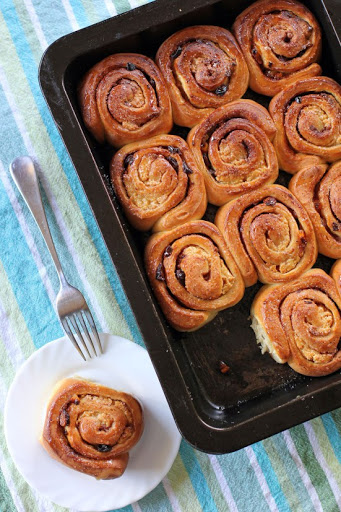 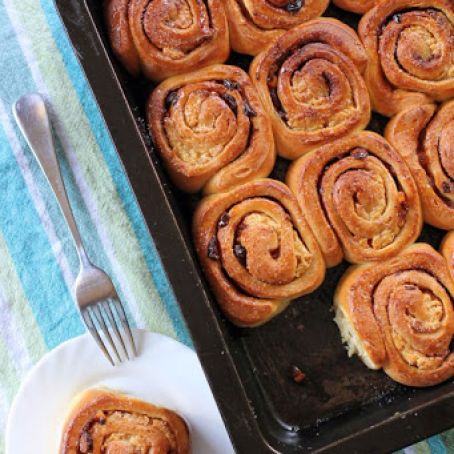 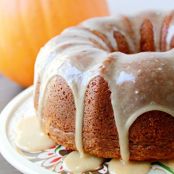 1. Dissolve the yeast in warm water. Set aside.
2. Mix together flour, sugar, and margarine, salt, eggs, milk and yeast mixture. Once evenly mixed knead the dough in a floured board. Form into a large ball then place in a bowl covered in cling wrap. Place in a warm place and let it rise for 1 hour or until it doubled in size.
3. Remove dough from the bowl, deflate and roll into a floured surface until it reaches 24 x 16 inches in dimension. The thickness should be around 1/4 inch.
4. Prepare the custard by mixing together condensed milk, egg yolks and flour. Place in a sauce pan then cook in low heat until if forms a stiff but spreadable custard. Turn heat off then set aside.
5. Prepare the filling by mixing brown sugar and cinnamon together.
6. Spread the softened margarine over the top of the flattened dough, sprinkle the cinnamon mixture, spread the custard then top with raisins and apricots.
7. Now start rolling starting on the 24 inch side until the end then cut into 2 inch slices. Place in a greased pan and set it aside for 30 more minutes letting it slightly rise again.
8. Bake for 10 minutes in a 200C pre-heated oven.
9. When rolls are cooked, glaze top with honey. 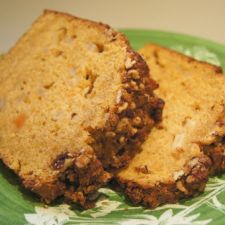