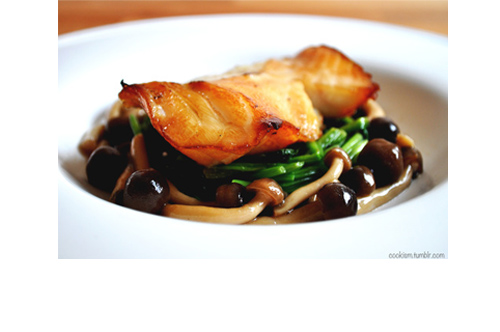 It is estimated that about 10percent of the world's fish catch is cod, and it is no surprise why. While the fish itself looks hideous, the flesh it yields is another matter-- alabaster white flakes oozing with omega-3 fatty acids and melts in the mouth. Here at Cookism, we decided to return to our roots and put an Asian spin on this heavenly fish, allowing its glorious natural oils to fuse with an emulsion of honey and soy sauce. The fish is then laid to rest on a jade bed of spinach, before being adorned with a garland of mushroom umbrellas. Praise be to Cod! 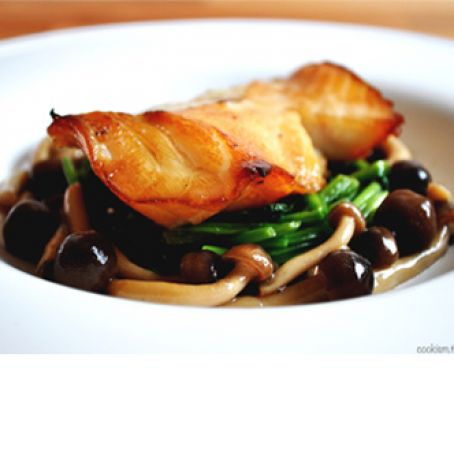 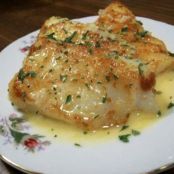 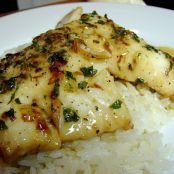 1. Add cod marinade ingredients in a large bowl. Stir well. Place the cod fillets in and cover the bowl with a plastic wrap. Marinate the fillets for 30 minutes, turning them on their sides halfway through for an even marinade.
2. Preheat oven at 160C. Place fillets (skin side down) on a tray laid with foil. Bake for 20 minutes on one side and 10 minutes on the other till cooked. Gently remove the skin from the cod using a pair of tongs when it is flipped to the other side. The marinade can be used as a sauce. Simply remove the ginger slices and reduce it over heat to achieve a thicker consistency.
3. In the meantime, stir-fry the mushrooms. Heat the pan and add in a little vegetable oil. Fry minced garlic till aromatic and add in the mushrooms.
4. Season mushroom with oyster sauce and sugar. Stir well. Mushrooms will start releasing water. Turn the heat up and stir-fry till liquid is reduced. Lastly, stir in sesame oil and remove it from the heat.
5. Bring a pot of water to boil and prepare a large bowl of cold water. Quickly add in all the spinach in boiling water and cook it for 30 seconds. Turn off the heat, drain immediately and soak them in cold water for about 1 minute. Drain, gather spinach and using your hands, squeeze out the excess water. Season it with soy sauce, mirin, sesame oil and sesame seeds. Toss well.
6. Place a 8cm cutter on the plate. Pack it with spinach and gently lift it up, keeping the spinach intact. Carefully place baked cod on the spinach bed. Surround spinach bed with mushrooms. Ready to serve!