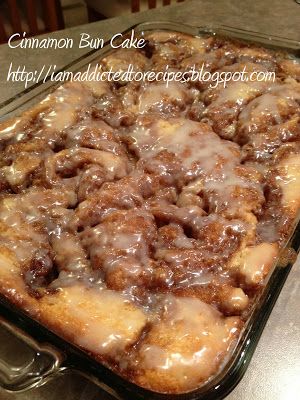 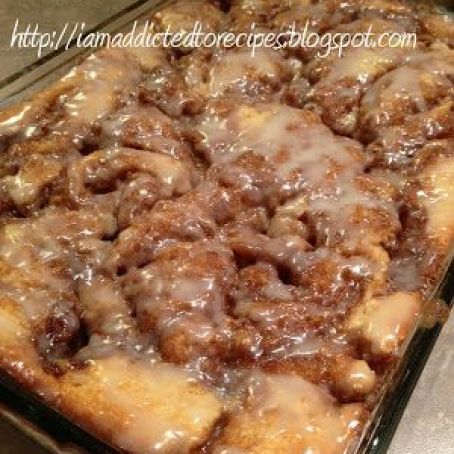 Join Me in My Addiction!

Thank you for visiting my blog...and for allowing me to share with you my addiction. I love to collect recipes. I love to read cookbooks. I have been collecting recipes for as long as I can remember, and on any given day there are one or two (or more!) cookbooks residing on my nightstand!

Mix all of the base ingredients together, with the exception of the butter. Add the melted butter last, and then pour into your prepared pan,

Mix all of the topping ingredients together in a separate bowl. Mix well. Drop by teaspoonful over the base, as evenly as you can over the entire base. Take a butter knife and swirl the topping into the base. Pop into the oven and bake for 28-30 minutes.

Oh dear...the Cinnamon Bun Cake that I just pulled out of the oven might not make it to morning...if it tastes half as good as it looks, it might be gone by midnight!"

Okay. This looks fabulous! I'm pinning this for sure. I am going to make time to go back and try this out. It looks like it would be wonderful served warm with a glass of ice cold milk. Yep, this looks like the people in my house would love this.

That looks really good. I'm bookmarking this for later. I may try freezing it (before glazing) since I like to make a cinnamon cake in a mug (or cinnamon mug), but all that measuring for one serving can be a bit much. Tho you do get a cake in just minutes.

Looks so delicious! I know I could not stop after one slice. Its time for me to restock my brown sugar. Definitely going to make this soon.

Thank you so very much for visiting Addicted to Recipes! I love reading all your comments and will do my best to reply as quickly as I can. I sure hope you will come back and visit again soon!