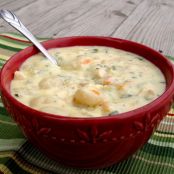 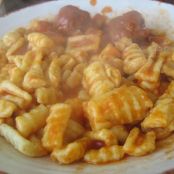 Bring a large pot of water to a boil and salt it. Meanwhile, place the chicken breasts on a work surface and, slicing with a knife parallel to the chicken, cut in half to make 4 cutlets. Pound the cutlets between 2 sheets of plastic wrap. On a plate, combine the polenta with half of the cheese. Fill another plate with the flour. In a shallow bowl, beat the egg with a splash of water. Season the chicken with salt and pepper; coat in the flour, then the egg, then the polenta mixture.

Add the gnocchi to the boiling water and cook until they float, 3 minutes; drain. In the pasta pot, melt the butter over low heat, then stir in the butter beans and rosemary. Add the gnocchi and remaining cheese; season with salt and pepper.

In a bowl, toss the tomatoes with the arugula, lemon juice and a drizzle of EVOO; season with salt and pepper. Top the chicken with the salad and serve with the butter beans and gnocchi