Twice-Baked Potatoes in a Dish and Potato Skins Preheat oven to 350° Fahrenheit. Scrub and pierce potatoes several times with a sharp knife. Bake potatoes at 350° for about an hour, or until potatoes give when squeezed gently with an oven-mitted hand.
When potatoes are done, cut in half and carefully scoop out insides, leaving about a 1/4-inch layer of potato inside. Set skins aside.

For the Twice Baked Potatoes in a Dish:
Place potato insides in a large bowl or the bowl of a standing mixer. Mix briefly to break potatoes down a little. Add cream cheese, sour cream, butter, chopped garlic, and about 1/2 teaspoon salt and 1/4 teaspoon or so of pepper. Beat until thoroughly mixed, but don't mix to the point of gumminess. If the mixture seems really thick, add up to 1/2 cup milk to smooth it out to the consistency of mashed potatoes.
Spray a large casserole dish with non-stick cooking spray. Spread potato mixture into the prepared pan.
Cover with foil and bake for 40 minutes at 325°.
Immediately after removing from oven, cover the top with 1 cup of cheese. Then sprinkle with about 2/3 of the bacon and sliced green onions, if desired. Allow to sit for about 10-15 minutes before serving. The heat from the potatoes will melt the cheese perfectly.
Makes about 9-10 servings.

For the Potato Skins:
After scooping out potato insides, you should have 18 half skins. Cut each of those in half, so you have quarter skins.
Heat about 2 inches of canola oil in a pan (about 325°). Fry potato skins in batches, careful not to crowd the pan. Once skins are a deep golden brown, remove to a paper towel-lined cooking rack to drain.
Place fried skins, open side up, on a baking sheet. Sprinkle each with cheese and a little bacon. Place in 325° oven for about 5- 10 minutes, or until cheese is melted. Top with sour cream and green onions, if desired.
Makes about 9 servings. 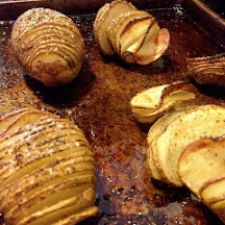