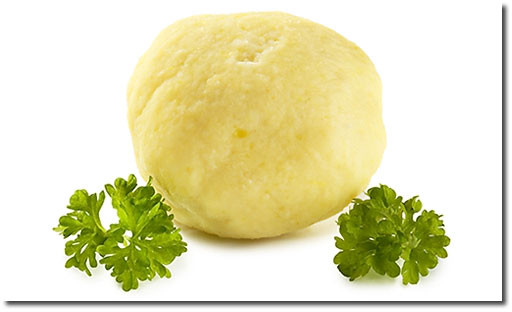 Kartoffelklösse are traditionally served alongside a Roast with lashings of gravy or with Sauerbraten and Rotkohl. Leftover potato dumplings can be enjoyed the following day thickly sliced and sautéed in butter. 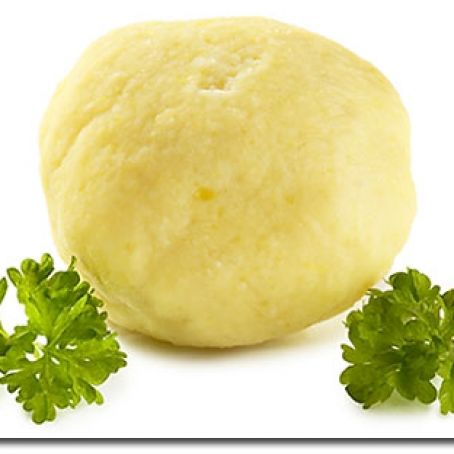 Scrub and rinse the potatoes well and place in a large saucepan of cold water. Bring the unpeeled potatoes to the boil, add salt and simmer the potatoes for around 35 minutes or until they are just tender. Drain the potatoes and cool them slightly -just enough so that you can handle them. You should now be able to peel the skins away from the flesh of the potatoes with your bare hands. Once all the potatoes are peeled, cut them into even-sized pieces and refrigerate until cold. The potatoes can be prepared the previous day, if desired.

Mash the potatoes with a fork or mashing tool in a large bowl. Mix in the salt and freshly grated nutmeg. Add half a cup of flour and mix to combine. With your hands knead the mixture in the bowl until a smooth soft dough forms, add more flour by the tablespoon if the dough remains sticky. Combine one beaten egg with the mixture.

Form the mixture into smooth round balls using ¼ of a cup of dough for each ball. At this stage you may wish to insert acrouton, prune or other filling into each dumpling. Croutons are traditionally used to soak up any extra moisture inside the Kartoffelkloesse. Stoned prunes are a common filling when accompanying a Roast Goose at Christmas. A small spoonful of cooked, flavoured ground beef / mince is also a tasty alternative. Seal the filling closed inside each of the Kartoffelklösse.

In a large saucepan of salted simmering water, almost boiling, poach the completed dumplings in batches of 4 to 5. Do not place more than 4 to 5 dumplings in the pot at any one time - to prevent them from sticking together or touching during cooking, which could cause them to fall apart!

Cook the dumplings for 10 to 15 minutes or until the dumplings rise to the surface. Remove and drain each of the Kartoffelklösse with a slotted spoon into a serving dish. Keep the dish covered to conserve heat while the remaining dumplings are cooked. 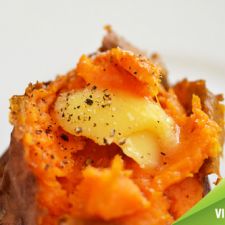