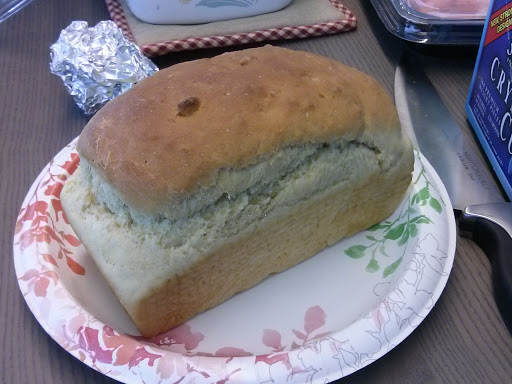 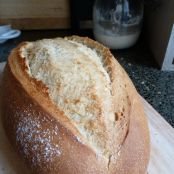 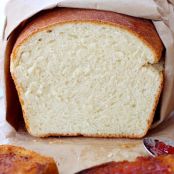 In a large mixing bowl, mix the warm water with the two teaspoons of active yeast (this will activate the yeast). Then add the eggs, olive oil and pale ale and hand whisk briskly.

Slowly add the flour, mixing with a wooden spoon as you go. You want to reach a point where you have a soft ball of dough that is malleable but not sticky to the touch.

Lightly cover a clean counter surface with flour and strenuously knead the dough for 5-10 minutes, making sure to turn it and fold it regularly as you knead. Then place the ball of dough into another large mixing bowl; one that is either lightly oiled or dusted with flour; cover (either with a lid or with a clean cloth) and leave in a room temperature location for around 45 minutes.

The dough should now have roughly doubled in size. Knead again for 3-5 minutes; make sure to punch the air out of the dough.

You should now divide the dough into two roughly equal parts for baking. I usually put half into a medium sized square bread tin (lightly oiled; but make sure the oil gets into the corners), and the other half as a round cob on a baking tray (again lightly oiled).

Don't put it in the oven yet! Cover the dough in its baking pans and leave it for another 45 minutes at room temperature so that it can rise a second time.

Pre-heat the oven to 400 degrees. Just before you put the bread in to bake you can prick the top of the dough a couple of times with a sharp knive (although when I forget to do this it rarely makes much difference!). I also put a baking tray with a few ice cubes at the bottom of the oven; the ice turns to steam and stops the bread from drying too much.

Bake for 20 minutes at 400, and then turn the heat down to 375 for another 10-15 minutes. The bread should look a light golden brown. Take it out the oven, remove from its baking pan, and leave on a cooling tray for a while.