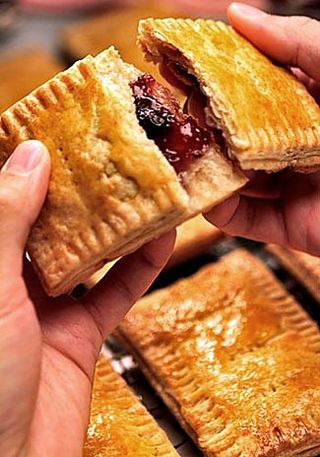 From LA Times. You can fill them with anything you like - strawberry jam, Nutella, etc. I also have a recipe for frangipane filling listed from the same article. This recipe is enough for 8 pop tarts 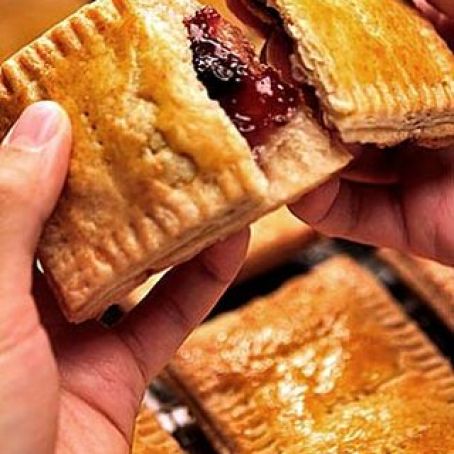 Pie Dough:
1. Cut the butter into medium-sized cubes and put it in the freezer. Put half a cup of cold water in the freezer too while you assemble the other ingredients for the recipe. Put two sheets of plastic wrap, about 24 inches long, on a work surface, overlapping them lengthwise by a few inches so that they form a big triangle.

2. Put the flours, sugar and salt in the bowl of a food processor, then pulse it once or twice to make sure the ingredients are combined. In a small bowl, mix together the egg yolk and vinegar. When the butter is quite hard, after about one-half hour, add the pieces to the food processor. Pulse it a half dozen times, until the pieces of butter are about the size of jelly beans.

3. Take the ice water out of the freezer (it should be very cold but not frozen) and mix it into the egg and vinegar mixture. Immediately add this to the mixture in the food processor and pulse until the mixture begins to come together. The bits of butter will still be visible, about the size of peas.

4. Dump the mixture out into the middle of the plastic wrap. Pull the edges of the plastic up around the dough, squashing it together and blending in the streaks of butter, which you should still be able to see in the dough. Don't overwork the dough or blend in all the butter: it should be streaky and just come together.

Pop tart assembly:
1. Take the chilled pie dough out of the refrigerator. Divide it in half, and put both portions on a floured work surface.

4. Using a pastry brush or a new paintbrush, brush half of the squares with the beaten egg, making sure you get to the edges.

5. Spoon a heaping tablespoon of filling into the center of each brushed rectangle, spreading it out a little but making sure that there's at least one-half inch of dough around the edges that does not have filling on it. Gently lift a second rectangle of unbrushed pastry on top of the one with the filling on it, pressing down along the edges so that the two pieces of dough stick together.

5. Using a fork, press the tines around the edges of all the tarts (dip it into your jar of flour to keep it from sticking). Prick the tops of the tarts in neat rows, to let the steam escape during baking. Place the tarts on a baking sheet lined with parchment paper. Place the tarts in the freezer for half an hour while you heat your oven to 375 degrees.