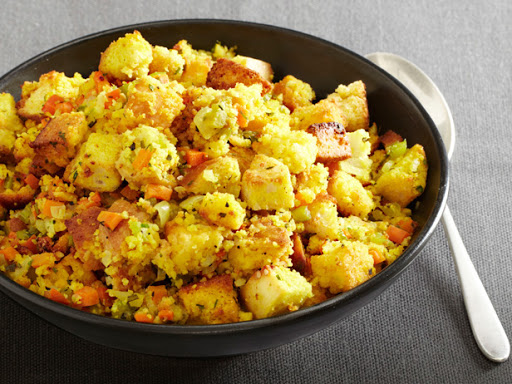 Ree Drummond's Cornbread Dressing is a masterpiece of holiday cheer straight out of the kitchens of Food Network. This recipe pairs well with everyone's favorite holiday foods. The day before making the stuffing, make the cornbread. Preheat the oven to 450°F. Melt 2 tablespoons shortening in a 9-inch cast-iron skillet over medium heat. Meanwhile, combine the cornmeal, flour, baking powder, salt, and baking soda in a large mixing bowl. In a separate bowl, whisk the buttermilk, milk, and egg until combined. Slowly incorporate the wet ingredients into the dry, stirring until combined. Melt the remaining 1/4 cup shortening in the microwave and add to the batter, stirring constantly. Pour the batter into the hot skillet, smoothing the surface with a rubber spatula. Bake until golden brown, about 20 to 25 minutes. Let the cornbread cool in the skillet, then cut into 1-inch cubes.

Spread the cornbread and French bread cubes on 2 baking sheets and let dry at room temperature, uncovered, until totally crisp, about 24 hours. Transfer to a large bowl and toss to mix them up a bit.

Preheat the oven to 350°F. Melt the butter in a large skillet or Dutch oven over medium heat. Add the celery, carrots and onion and cook until the onion is almost translucent, about 6 minutes. Add the chicken broth and bring to a boil. Reduce the heat to low and add the rosemary, thyme, sage, and turmeric. Gradually ladle the broth mixture into the bowl with the bread, tossing gently. Taste as you go and add salt carefully. If the mixture is not moist enough, add a bit more chicken broth. Stir in the parsley.

Transfer the mixture to a 9x13-inch baking dish. Bake until golden brown, 20 to 25 minutes. Let rest 10 minutes before serving.