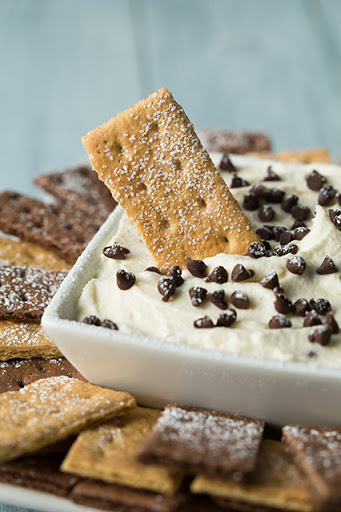 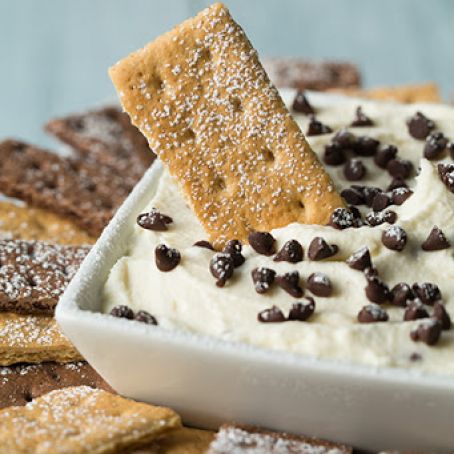 In a mixing bowl using a spatula, blend together Ricotta and Mascarpone cheese, while pressing mixture along bottom of bowl to smooth mixture. Fold in powdered sugar. In a separate mixing bowl, whip heavy cream until stiff peaks form. Add half of whipped cream to Ricotta mixture and fold until combined, then add remaining half and fold until combined. Fold in chocolate chips, reserving 1 - 2 Tbsp to garnish. Serve topped with remaining chocolate chips, dusted lightly with powdered sugar if desired and serve with graham crackers, strawberries, cannoli chips or fried flour tortilla chips dusted lightly with cinnamon.

*To strain I simply lay the ricotta over several layers of paper towels, then wrap and squeeze to remove excess moisture. You want to remove enough moisture that the Ricotta should hold it's shape pretty well so you may want to do this step twice.

**If you don't want the dip fluffy you can reduce the amount of heavy cream or even omit it (which will give it a texture closer to a traditional cannoli filling). If you do omit it you may want to reduce the powdered sugar by a few Tbsp.