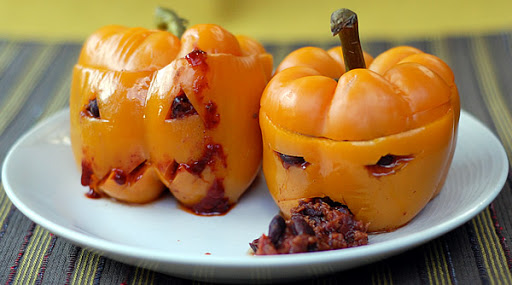 Scary pumpkins are a perfect Halloween supper! Stuff orange peppers with a spicy chili. Add a bean in each eye to make the scary pumpkins seem a little more real. 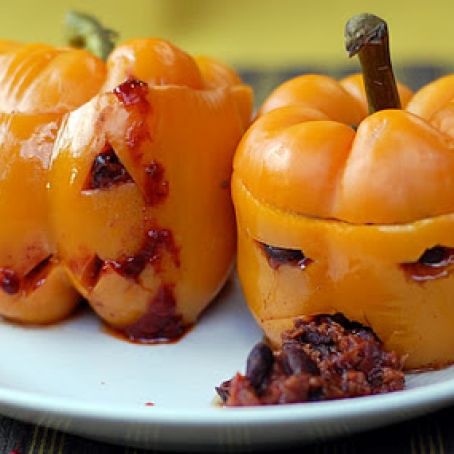 This first part of this recipe uses a 1 1/2 to 2 quart slow cooker when you make the chili. If you choose to cook your stuffed peppers in a slow cooker you will need a 4 quart or bigger or you can bake them in your oven.

Drain the tomatoes into a small food processor. Don’t worry about getting every drop out of the can or squeezing them dry. You just want to get what pours out freely. Add 1 to 2 chipotle peppers to the food processor depending on how hot you want your sauce to be. You can also spoon some extra adobo sauce in from the can to get the heat level up. Puree and set aside.

In a 1 1/2 to 2 quart slow cooker add the contents left in the tomato can, 1 to 2 teaspoons of the chipotle sauce you just made, black beans, seitan, garlic, oregano and chili powder. Cook on low 7 to 9 hours (or 4 to 5 hours on high).

Add salt and pepper to taste before serving or stuffing into peppers.

MAKE THE STUFFED PEPPERS
Oven directions: Preheat oven to 350°F and grease (or line with parchment paper to make oil-free) a Dutch oven or a casserole dish and use foil later to cover it.

Using a sharp knife carefully cut the top off. Cut away the seed portion that will probably stay with the top. Then cut away any of the whiteish parts on the inside ribs and remove any seeds that fell in.

Now you will use a small paring knife to cut out the face. you can use any Jack-O-Lantern patterns, but be mindful that the holes aren’t too big or your chili will run out through the very holes you just cut. I really recommend stuffing one bean in each eye to help with leakage and just because it looks good and spookier!

Stuff your works of art with the cooked chili. It can be hot or from the fridge since you will be cooking them. Place them in the Dutch oven, cover and cook for 20 to 30 minutes or until the peppers are easily pierced.

They will be hot and oozing, so use a large spoon to scoop them onto a plate. Using the end of a knife or a tiny spoon, paint chipotle sauce blood on your Jack-O-Pepper. You could serve this on a bed of black forbidden rice to take the theme even further.

Slow Cooker Directions for cooking the finished stuffed peppers: To bake them in a slow cooker you will need to use a 4 to 6 quart slow cooker to have the 4 peppers fit inside without crowding. Add a little bit of water, but not enough to come up to the holes you’ve carved. Cook on low 6 to 9 hours. Still be very careful lifting the piping hot peppers out!

Note: This chili get’s its spice from RolandⓇ Chipotle Peppers in Adobo Sauce. It’s pureed into a sauce with the juice from the canned tomatoes, so you can make it as hot as you want by adding more or keep it mild for the kids and serve it all on the side. It also makes for some spooky “blood” for your scary stuffed peppers. 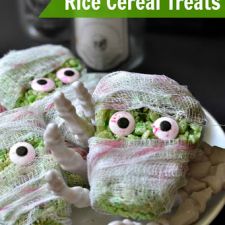