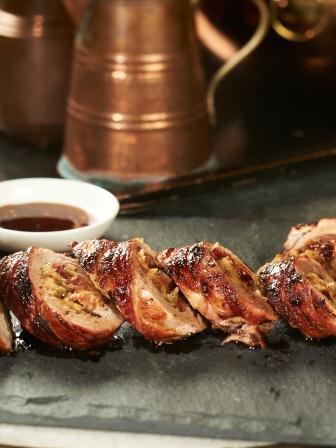 "If you ask me, there is nothing better than pork wrapped in more pork. This beautiful dish is an ode to the Divine Swine, and is sure to wow your guests."—David

Tip: If you don't have a meat mallet on hand there are many alternatives you can use. A rolling pin works just as well, as does a large, heavy frying pan. 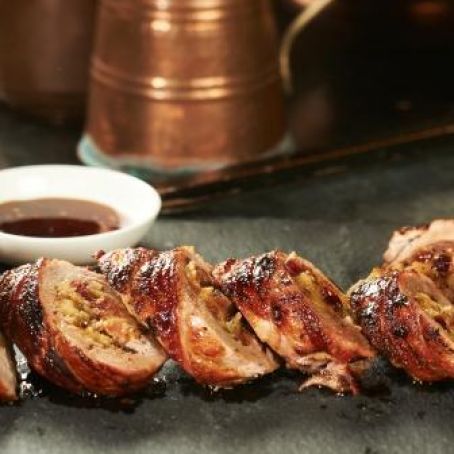 To prepare the pork, butterfly the tenderloins in half lengthwise, being careful not to cut all the way through.

Pound the tenderloins with a meat mallet each are 1/2” thick. Refrigerate the meat until you’re ready to stuff.

To prepare the stuffing, dice 2 slices of bacon and cook in a medium-size skillet over medium heat until browned, about 15 minutes. Add the onions and celery and sauté until the onions are translucent, about 8‒10 minutes.

Add the garlic and sauté for another 2 minutes. Add the chicken stock, cranberries, thyme, 1 tsp salt, and 3/4 tsp pepper. Bring the mixture to a simmer and remove the skillet from the heat.

To make the glaze, combine the honey, soy sauce, and chipotle in a small bowl. Stir until the mixture is combined. Divide in half and reserve.

To finish the tenderloin, preheat the oven to 375°F. Divide the stuffing in half. Place one half of the stuffing onto each prepared tenderloin and spread the stuffing lengthwise across 3/4 of the meat, leaving about 1” bare at one end.

Starting with the stuffing-filled end, roll the meat firmly, lengthwise. (Be careful not to squeeze out the stuffing.) Secure closed with the toothpicks.

Wrap 3 slices of bacon around each stuffed tenderloin. Tie each tenderloin with the twine, about every inch or so, securing the bacon and the stuffing. Remove the toothpicks and season with the remaining salt and pepper.

Baste the pork with half of the glaze and continue to roast for another 5 minutes. Next, flip the pork and baste again. Continue to cook another 10–15 minutes, or until the stuffing reaches 165°F. Remove the tenderloins from the oven and let them rest for 3–5 minutes. Finally, remove the string, slice, and serve with the remaining glaze. 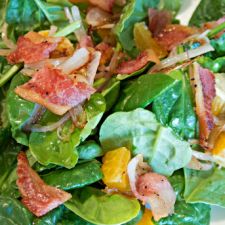