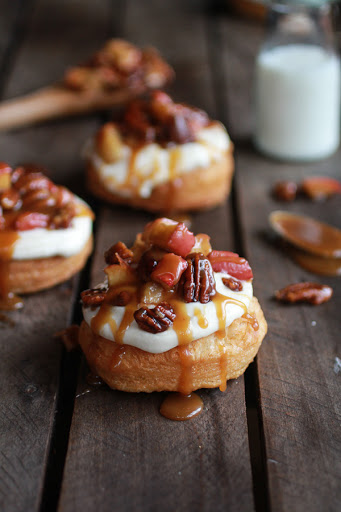 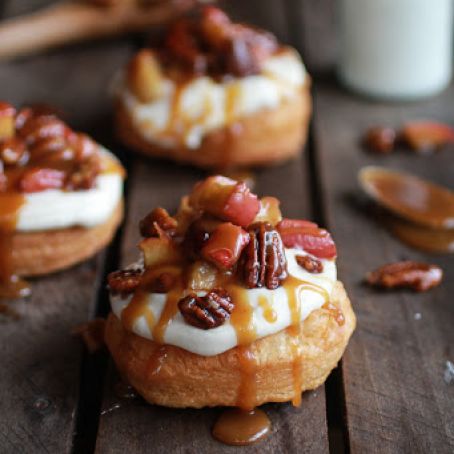 Open the cans of crescent dough and divide into sets of two triangles. Press the 2 triangles together to seal and form a rectangle, repeat with remaining triangles. Stack 2 rectangles on top of one another, press them together, and then fold widthwise. Press down. Repeat with remaining dough. Using a 3-inch cutter, cut as many rounds as you can, then roll out remaining dough and cut as much as you can, I got 8 cronuts. Place the cronuts on a floured baking sheet. Cover with large towel and place in a warm place in your kitchen. Allow doughnuts to sit for one hour.
While the doughnuts rest make the caramel. Add the apple cider to a medium sauce pot and bring to a boil, boil for about 15 to 20 minutes or until the cider has reduced to about 1/3 cup and is thick and syrupy. Reduce the heat and add the brown sugar, butter, cream and cinnamon. Bring back to a boil, reduce the heat and simmer for about 5 to 10 minutes or until the the caramel is thicken and dark in color. Remove from the heat and stir in the vanilla. Set aside to cool and thicken more.
Make the frosting, in the bowl of a stand mixer beat together the butter and cream cheese until smooth and fluffy, about 3 minutes. Add powdered sugar and caramel sauce and beat until smooth and combined. Beat in the milk. Set aside in a cool area.
Make the apple pecan pie topping, heat a medium size skillet over medium heat, add the butter. Add the apples, brown sugar, cinnamon, nutmeg and salt, cook, stirring occasionally for about 5 minutes. Add the pecans and cook another 5 minutes or until the pecans are toasted and the apples are caramelized. During the last minute add the vanilla and cook another minute. Remove from heat and set aside, but keep just slightly warm.
Heat a pot of oil to 375 degrees. Fry the cronuts in the oil for about 30 seconds on each side, until golden brown. Place on a baking sheet lined with paper towels and allow to cool before frosting.
Once cool, spread on to each cronut a good dollop of the frosting and then top with the apple and pecan pie topping. Drizzle with the apple cider caramel sauce. Eat! Like IMMEDIATELY!
These are best the very same day they are made, but we still enjoyed ours for a couple of days afterwards. Especially heated up in the microwave. 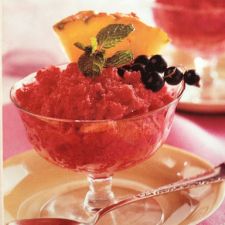