Chocolate cupcakes are filled with green slime pudding and iced with lime green blob frosting and decorated with scary bones and eyeballs! 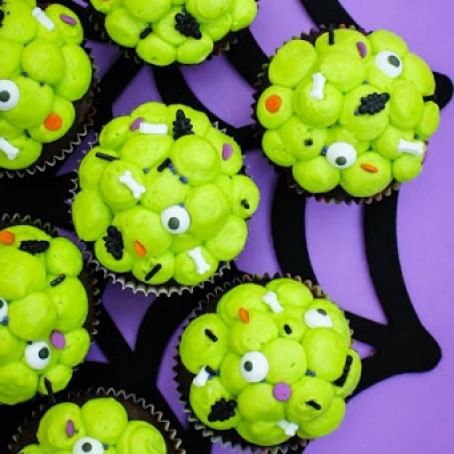 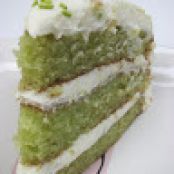 Bake 24 of your favorite chocolate cupcakes and set aside to cool.

Whisk together 4 cups of milk and 2 boxes of white chocolate Jell-O pudding for 2 minutes. Add in a few drops of lime green gel food coloring. I used electric green by Spectrum which I get from a baking supply store. I’m not sure Wilton makes a lime green, however, mixing together a small amount of their leaf green and yellow would get a similar result. Cover and set in fridge to setup for a few moments.

While your pudding is setting up, core your cupcakes. I like to do so by using a large round tip. Just insert and pull out to remove just enough cake to fill without sacrificing too much cupcake. I use Wilton tip #2A.

Once pudding has set up (about 5 minutes) pour into a piping bag with a large round tip (again I used tip 2A). Fill your cupcakes by inserting tip all the way down into the cupcake then releasing pressure and pulling up. Set cupcakes aside.

Begin making frosting by beating together 2 sticks unsalted butter and 1 cup Crisco. Add vanilla, beat well. Slowly add in entire bag of powdered sugar until about one cup at a time. Once mixed well, add in milk 1 tablespoon at a time. I find 4 tablespoons was the perfect amount for this, not too stiff but still able to hold a nice shape. Now add the same green coloring until you have achieved the desired color.

Fill up a clean piping bag with icing with the same round tip you’ve been using (after a wash of course).

To decorate the cupcakes your going to just be making simple little blobs. Really it can’t get much more simple! Just press a bit and release. If your new at piping maybe pull out a bit of wax paper and try a few blobs first till you get the hang of it. I promise it will be the easiest pipping ever though.

Starting at the center working your way out, pipe on your little icing “blobs”. Feel free to get random with it…and stack a few. Don’t worry that they have those little tips…we’ll get to that next!

Once you’ve piped a few they will have crusted over a bit. Use a small piece of Viva paper towel and gently push down the tips of your “blob” to make them little bubbles. This is a trick used to smooth out buttercream cakes!

Now you should have a bunch of slime filled bubbling green blob cupcakes.

Add on some sprinkles. I actually have a special pair of tweezers that I use only on foods for times like this. I didn’t just want the sprinkles everywhere. I wanted the little black “hairs” sticking up and the bones to be visible. So I applied some on with the tweezers and some I just sprinkles on like normal.

Now you have some fun cupcakes to gross out the kids, or your co-workers.