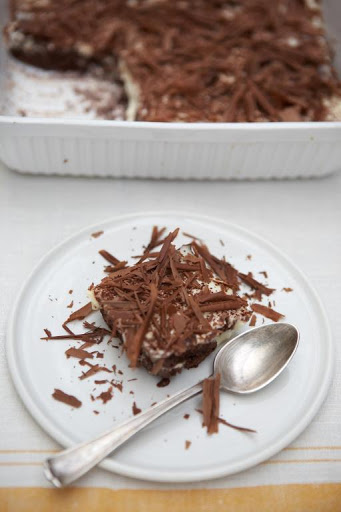 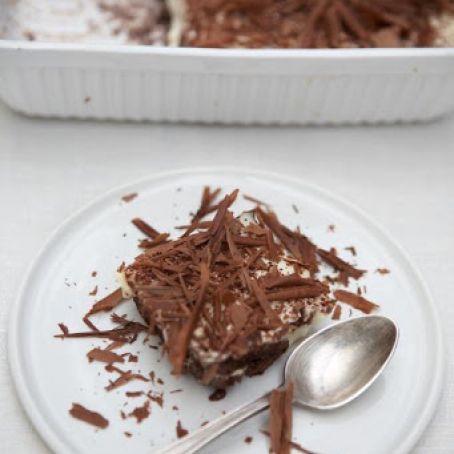 1. Preheat the oven to 180ºC/350ºF/gas 4. Grease and line a large shallow tray (approximately 25cm by 40cm).
2. In a large bowl, use an electric hand whisk to whiz the sugar and eggs together for about 4 to 5 minutes, or until light and fluffy. Meanwhile, melt the butter in a small pan on a medium heat, then fold it through the sugar and egg mixture with a spatula. Sieve the flour and cocoa powder into the bowl and carefully fold the mixture together in a figure of eight motion. Once combined, spread the cake mixture across your prepared tray so it's about 1cm thick. Cook for 10 minutes, or until firm and springy to the touch. Leave to cool.
3. Meanwhile, smash the white chocolate and add it to a glass bowl with milk. Sit it over a pan of gently simmering water, making sure the water doesn't touch the base of the bowl, and leave to melt, stirring occasionally, until smooth. Leave to cool a little.
4. Carefully mix the mascarpone with the caster sugar, egg yolk and vin santo. Once combined, fold through the melted white chocolate. The sponge should be fairly cool by now, so tear it into chunks and use it to cover the base of a 20cm by 30cm serving dish in a double layer (don't worry if it breaks up). Sprinkle over the Tia Maria and drizzle with the espresso and leave those to soak in for a couple of minutes.
5. Spoon the mascarpone mixture over the top, spreading it out in a fairly even layer. Dust the whole thing with a little cocoa powder, then scatter with some shavings of dark chocolate, if you like. Pop in the fridge until you're ready to eat.