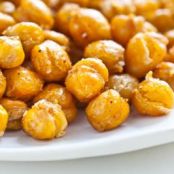 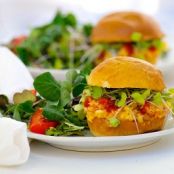 1. Cook the quinoa in the vegetable broth, stirring occasionally for about 15 minutes or until no liquid remains. Let the quinoa cool down a little.

2. Meanwhile, run the spinach and cilantro through a food processor. (You could even throw the garlic and red onion in there, to make it even easier).

3. Drain and rince the chickpeas (AKA garbanzo beans) and place them in a large bowl.

5. Mash up the ripe avocados before adding them to the bowl as well. Finally stir in the halved cherry tomatoes.